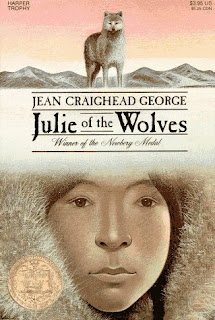 Summary: Miyax, like many adolescents, is torn. But unlike most, her choices may determine whether she lives or dies. At 13, an orphan, and unhappily married, Miyax runs away from her husband's parents' home, hoping to reach San Francisco and her pen pal. But she becomes lost in the vast Alaskan tundra, with no food, no shelter, and no idea which is the way to safety. Now, more than ever, she must look hard at who she really is. Is she Miyax, Eskimo girl of the old ways? Or is she Julie (her "gussak"-white people-name), the modernized teenager who must mock the traditional customs? And when a pack of wolves begins to accept her into their community, Miyax must learn to think like a wolf as well. If she trusts her Eskimo instincts, will she stand a chance of surviving? (from goodreads.com)
Why was it challenged?: This book is listed at #32 on the ALA's most frequently challenged books 1990-1999 and #91 on the 2000-2009 list. It was challenged for sexual content, offensive language, violence and being unsuited to age group.
From the author: I had the good fortune of emailing back and forth with Jean Craighead George as I was preparing for Banned Book Week this year. Here is what she had to say about Julie of the Wolves making the Most Frequently Challenged Books list:

"I'm delighted to be on the list of Banned Books. To think that I am in the company of Mark Twain, the Bible, and other giants of literature is mind blowing. What an esteemed group.
I don't know why "Julie of the Wolves" was banned, but the critics seem to be fussing about Daniel's pushing his wife, Julie, to the floor and tearing her dress. They call it "rape" because they didn't read it correctly. Daniel ran outdoors saying, "I can,"(surprise) -- that is, he is able another day to claim Julie as his wife -- so Julie, who is afraid of him, leaves. I had to have an urgent reason to have an Eskimo girl run away, as the Eskimos are very home and family oriented. Since "My Side of the Mountain" was criticized for not motivating Sam, I motivated Julie.
And thereafter lies her tale of revealing the intelligence and behavioral traits of wolves."

My Thoughts: This was one of my favorite books when I was a kid. I can't remember what age I was when I first read it, but I do know that I read enough times that the book looks like it was run over by a truck. Never once did I think to myself that the book was over my head or innapropriate (kids never do). I admit that when I thought back on the book I only remembered the very basic points of the book. "Young girl runs away and lives with wolves". In reading it again recently I remembered why I liked it- the wolves. I love wolves. I still do- I travel to Yellowstone as often as I can and I find myself completely enthralled when watching packs of wolves. I thought the way Julie lived with them was magical, the way they communicated and built relationships was what really held my attention as a kid.

As an adult I appreciate the rest of the story more. There is the scene between Julie and Daniel, which has been construed as rape, but which I still don't read that way. Bordering on abuse? Sure. It's enough to propel Julie out that door and into the unknown. These things happen every day. People get into fights, women (and men) are abused at the hand of their significant other, and people are raped. Just because it makes some people uncomfortable to read about it, doesn't mean it should be written about. Someone might need to read to find comfort in their own lives. However, that's not what this book is about (in my opinion). The fear she feels when she looks at Daniel is what prompts her to begin her journey on the tundra, where she really figures out who she is and what she wants. That's what the story is about, and it's a shame that some people will miss out because of one scene that has somehow managed to overshadow the rest of the story.

About the author: Please go check out Jean Craighead George's website. She has written some phenomenal books (My side of the Mountain being my favorite) and her website is an absolute wealth of knowledge.

Contest: don't forget to enter my Banned Book Week Giveaway, which includes a copy of Julie of the Wolves :)