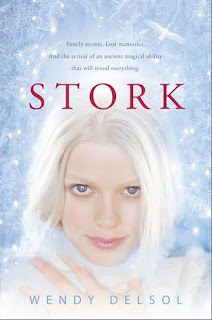 Summary: Sixteen-year-old Katla has just moved from Los Angeles to the sticks of Minnesota. As if it weren’t enough that her trendy fashion sense draws stares, she learns to her horror that she’s a member of an ancient order of women who decide to whom certain babies will be born. Add to that Wade, the arrogant football star whom Katla regrettably fooled around with, and Jack, a gorgeous farm boy who initially seems to hate her. Soon Katla is having freaky dreams about a crying infant and learns that, as children, she and Jack shared a near-fatal, possibly mystical experience. Can Katla survive this major life makeover and find a dress for the homecoming dance? Drawing from Norse mythology and inspired by The Snow Queen by Hans Christian Andersen, debut author Wendy Delsol conceives an irreverent, highly entertaining novel about embracing change and the (baby) bumps along the way.

Review: I will be honest here- I was expecting this book to be totally cheesy. For whatever reason I wasn't sure that the premise of real life, human storks, who decide who should be pregnant and when would work for me. Especially when you add in the whole fish-out-of-water stroyline that was backing it up. I was totally wrong! This book got me. I think that Delsol took a story that was light and funny (LA teenage fashion plate dropped in MN) and was able to pair it with some really serious plot-points (Katla and Jack's near death experience as children) as well as some really interesting myth's and legends (Human storks, Ravens, etc.) to make a really well rounded book. It was a quick and easy read and I found myself thinking about it for a few days after I finished reading it.

Katla is a fun charecter. She's confident in herself and even when she finds herself totally out of place she doesn't become a "poor-me" type of girl. It's fun to watch as she finds out she is the newest member of the Storks, a group of mostly Grandma aged ladies who, through things like dreams, are able to pair babies with mothers. It's an interesting power to have, to be able to grant someone's wish, and it's not something that you see everyday in a book, so it was a welcome thing to read about. In addition to all that Katla is also dealing with the normal awesomeness that comes with high school, like boys and homecoming. Then on top of that add a childhood incident that everyone but Katla remembers, one where she almost died, but was saved by Jack. Without giving anything away, I thought it was great that Delsol didn't shy away from looking at repressed memories and the choices that parents make in order to protect their children, even if they don't always turn out to be for the best. I thought Katla's story was well balanced out between the normal and the supernatural.

I also loved the secondary players. Jack was fabulous as the guy who remembers Katla the way she was before the accident, remembers saving her and so desperately wants her to remember him as well. He's dealing with own supernatural issues and is trying to keep it all together (and play in the homecoming football game). Katla's parents are great- although divorced, both are involved and available to Katla, which is something I feel we don't see enough of. Wade and Monique are perfect in their king and queen of the school roles and Wade becomes the perfect enemy as he inches into the supernatural world as well. Penny and Tina are the right kinds of friends for newcomer Katla- showing her the best parts of MN and letting her show them a little bit of LA fashion.

I also can't say enough about the Storks- they are creepy and somehow totally endearing at the same time. Hulda is the head of the Storks and she helps Katla figure it all out, while talking in clipped sentences and riddles. I love when she shows Katla's father her warehouse is for sale and tells him that it is all about karma, and asks him to relay a saying back to his investors overseas. The vision of a serious business man repeating Hulda's confusing sayings to important investors was funny to me.

Overall, this was a really well rounded book. It was gorunded in reality, but allowed for us and the charecters to look into myths and legends and see the truth there as well. I'm really looking forward to Frost, the second book in this series, even though I am not at all looking forward to the wait (it's not out until next fall).