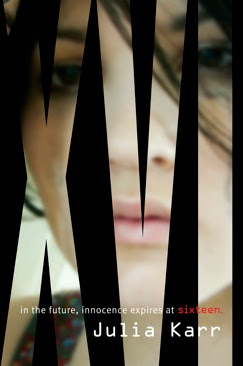 Summary: In the year 2150, being a girl isn’t necessarily a good thing, especially when your sixteenth (read sex-teenth) birthday is fast approaching. That in itself would be enough to make anyone more than a little nuts, what with the tattoo and all – but Nina Oberon’s life has taken a definite turn for the worse. Her mother is brutally stabbed and left for dead. Before dying, she entrusts a secret book to Nina, telling her to deliver it to Nina's father. But, first Nina has to find him; since for fifteen years he's been officially dead. Complications arise when she rescues Sal, a mysterious, and ultra hot guy. He seems to like Nina, but also seems to know more about her father than he’s letting on. Then there’s that murderous ex-government agent who’s stalking her, and just happens to be her little sister’s dad (from Juliakarr.com)

Review: It's no secret that I'm a huge fan of dystopian. I love the idea that you can take what is happening right now and imagine a future where the consequences are huge. In fact it's a lesson in unintended consequences. With all the marketing that is happening today, aimed at tweens and teens, it isn't a huge leap to see how in the future that we will be so inundated with it that it controls every moment of our lives and every choice we make.

Here we see a world where the media and the government work in lock step to control everything. Right down to when you can become sexually active. In fact you are tagged with a tattoo that indicates your age- for girls when you are 16 you recieve an XVI on your wrist which idicates you are now fair game, you are now officially "sex-teen". There was a lot here that I really liked. I enjoyed the premise. It didn't seem so far-fetched and that is what I enjoy most about the dystopian books that are out there.

Nina is a believable charecter who you can connect to really fast. You see that she has been raised outside of the mass media that is thrown at them every day. Still, some of it has got through, how could it not? To see her struggle with the reality that "not all is what it seems" is interesting. To see her reconcile what she thought was true and what really is true as secrets are revealed throughout the story is both heartbreaking and full of hope.

I absolutely loved the secondary charecters. Sal, as the love interest, is earnest in his beliefs and also is honest in presenting the secret world of NonComs to Nina. He knows more then she does about the world in which they live, including stuff about her family, but he tries not to overwhelm her, or give her hope where there may not be any. Her female friends Wei and Sandy are opposite ends of the spectrum. Sandy is the embodiment of what "sex-teen" is supposed to look like. She watches the videos and practices her flirting and her greatest aspiration is to join the FeMLs, which she believes will get her out of the Cementville adn help her family, but FeML's, like most other government and media programs are not all they seem,a nd the truth is much darker. Wei represents the resistance, the NonComs and who Nina could become. It was a perfect way to illustrate the two different worlds Nina lives in and the two possible futures that lay ahead of her.

Still, for all that was wonderful about this book, I was still left a bit dissapointed. Not hugely so, but enough that I feel it's worth mentioning. I felt like the broad strokes of the book were fomulaic. Dysopians, at least the bunch that I have read, seem to follow a pattern. There is usually a girl, who lives in a world that is unfair to some degree, who begins to question that world, who has an absent parent, who meets an interesting boy who shows her things she hadn't dreamed of about this world. Eventually she finds out something about her family and their place in the world and then she rebels. Then we wait for the next book. It was easy to predict where the story would go for the most part. That isn't to say it wasn't extremely well done, it was. So this isn't neccessarily a complaint about this book, so I hope you don't take it as such. It's more of a comment on dystopian books in general. XVI was interesting and well written, but still, I wanted some new twist, something that would surprise me, and it wasn't there. I also wanted to knowm more about how the world Nina lives in came to be. There were hints at wars and treaties, but not a lot of detailed information. As someone who LOVES history I really wanted more. That, I imagine, is more of a personal preference then anything else. Others who read the book might think it was perfect in that aspect- but for me, you can never go wrong with more information. Your book might be 1000 pages, but I'd be into it!

At the end of the book I wasn't ready to set it down. The ending was spot on. It wrapped up the story at hand nicely and gave us a small tease as to where the book would go next. If there was never a sequel I would be satisfied with how it resolved. Of course, there is a sequel, and I'm excited to see where Nina goes next on this journey!