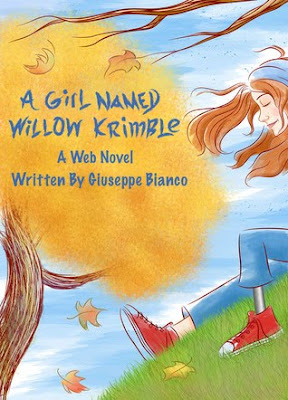 Summary:
Willow lives with her mother and older brother, Wyatt; she loves hanging out with her best friend, the feisty and sarcastic Razzel Fiora, and she has a close relationship with her grandmother. Seems pretty normal, right? It might be if the two most popular girls in middle school, Shayla Stergus and Snella Burenbine, did not taunt and remind her, on a daily basis, that she was born without her left leg.

Forced to maneuver through obstacles most teenagers would not need to tackle, Willow is suddenly blessed (or cursed?) with the unusual power to heal others through touch. Ever selfless, Willow’s desire to help the injured and sick thrusts her into a world where she is given immense responsibility, putting the needs of others before her own, all the while trying to maintain her secret.

Willow’s adolescent journey takes her through an emotional cyclone where she finds joy and purpose in helping an array of patients from an old man with Alzheimer’s to a mauled animal in a pet store. But Willow soon finds out there are limitations to her ability and, no matter how hard she might try, she cannot save everyone.

Through the intermingling of joy and pain, Willow is repeatedly tested to discover just how strong she can be, how strong she has been her entire life, and how everyone possesses the ability to effect another person’s world, with or without a secret power.(from goodreads.com)

Review:
**NOTE: there are some minor spoilers ahead. Nothing that gives the whole book away, but a few things I couldn't really leave out while writing this review**
This was a highly enjoyable middle grade book, which the author was nice enough to send me. Anyone can read it for free online on the Willow Krimble website, but there's something about holding onto a book that really helps me get into a story. So, straight off, THANK YOU to Guiseppe Bianco for sending me a copy of this great book!

Onto the story- there is so much going on here that I love that it's hard to know where to start. At the heart of the story is Willow Krimble, a rather unassuming 8th grader who has a pretty good life, a great family and a fabulous best friend named Razzel. Life is never quite as easy as it seems though. Willow deals with the normal teenage angst, boys that you kind of hate but maybe really like, mean girls that take advantage and bully you at school, and family problems and heartache that can come from losing a parent. Plus she has some not so run-of-the-mill issues. For one, she has only one leg and this makes her a target for taunting and also makes her self conscious sometimes. She also finds herself dealing with a mysterious skill, one that could be seen as a blessing or a curse, the ability to heal people by simply touching them. Still, where other people might become the victim, I never felt like Willow was. She is picked on by the mean girls of her school, but she is never broken. She could have shied away from using her skill, but instead she seeks out some words of advice at her church adn decides to embrace it, and change the lives of those she can. Even her worst enemy, who once upon a time was a friend. I adored that about Willow. She was a strong, independent, well adjusted kid who was loyal to her friends and who would do just about anything to help someone in need, including paralyzing some imaginary bats for a patient at the hospital.

Willow was not the only great character at work here. Razzel her best friend was always ready to defend her against bullies, and beyond that, Razzel was ready to defend anyone she saw as being picked on. It's good to have those people out there, even if they do have a little trouble controlling their anger sometimes. Even Shayla, a member of the mean girls clique, isn't one dementional. As the story proceeds we see how and why she ended up the way she is, and we see her trying to find her way back to a better place. Snella, Grandma Trish, Wyatt, the parents (who I will talk about in a minute) Mrs. Protts and Tristan are all characters that directly impact Willow in some way and despite being secondary players they are all given a chance to be fully developed. It's really great to see, every character is there for a reason, even if it's only for a few passages here and there.

Now for the parents. For anyone who has been reading this blog, you already know I have a hang up about parents in YA and Middle Grade books. I hate the bad parents, the absentee parents and the way they are used to make the leading lady seem like she is alone and needs to be rescued by some mysterious, brooding boy. I was so happy that we didn't see that here! Here we see some absolutely amazing parents who are involved and enganged with their kids, even as they try to hold down a job and put food on the table. Mrs. Krimble is busy being a single mom to two teens. She's busy, she's overworked and I'm sure she misses her husband. Still, she makes time to spend with her kids, she's ready to help them if they need it and she's paying attention enough to see when something is wrong. So. Refreshing. Mr. Krimble on the other hand is not around. Having died from Leukemia a few years earlier he is absent as his daughter finds herself dealing with her new powers. Bianco still amanges to make his presence felt through a few well times flashbacks. We see him at Willows birthday, 6 years in the past, already ill and trying to have some closure with his daughter. He knows he won't live long, and he wants Willow to know he loves her and that he believes in her. Even if she doesn't realize it at the time, he knows that he has to tell her these things because someday she might need to knw that he is watching down on her and is always on her side. I have to admit- I teared up a bit.

So, in short, bravo to Bianco for creating a character in Willow that I never felt sorry for despite her disability and the teasing she endures, and for putting some wonderful parents and friends beind her to help her get through it. This book is full of great messages about being yourself, finding great friends and standing by them, giving of yourself to help others and giving people a second chance. It's a book worth reading.