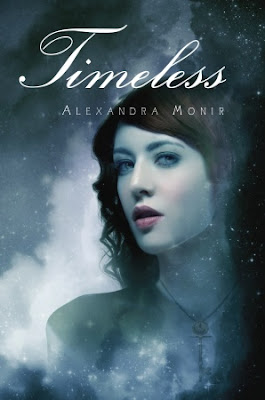 Summary:
When tragedy strikes Michele Windsor’s world, she is forced to uproot her life and move across the country to New York City, to live with the wealthy, aristocratic grandparents she’s never met. In their old Fifth Avenue mansion filled with a century’s worth of family secrets, Michele discovers a diary that hurtles her back in time to the year 1910. There, in the midst of the glamorous Gilded Age, Michele meets the young man with striking blue eyes who has haunted her dreams all her life – a man she always wished was real, but never imagined could actually exist. And she finds herself falling for him, into an otherworldly, time-crossed romance.

Michele is soon leading a double life, struggling to balance her contemporary high school world with her escapes into the past. But when she stumbles upon a terrible discovery, she is propelled on a race through history to save the boy she loves – a quest that will determine the fate of both of their lives. (from goodreads.com)

Review:
This was a tricky book for me. I liked it, then I didn't, then I loved what was going on, then I was rolling my eyes, then I was down with it again, and then I was frustrated. Timeless had a lot of really great parts, wonderful detail a story line that was both classic and original, there were just a few things that irked me. I'll start with the bits that bothered me and then end on a high note with all that was wonderful about this book. So lets get to it.

Two main things bugged me. this book is about time travel, which is generally very cool. I'll get into the way it was handled in a minute (it was pretty cool), but the language that was used during the actually moments of time travel drove me nuts. Overall the writing is good, the descriptions of the places and people are spot on, but the moments when Michele actually travels through time felt off. It almost felt like a throw away- the description were short and didn't do much for me, especially when sandwiched in between really well developed worlds. It didn't ruin the book by any stretch of the imagination, but it did bring me down a bit.

The second thing that killed me was the end of the book. It's "to be continued", literally. It says that. It was so not neccessary in my opinion. The suspense of the moment that occurs right before that is enough. It lets you know that there is more to this story. Even if there was never another book, it lets you know that this story will carry on for Michele. It was a pretty perfect moment, and then, "to be continued". Three little words that totally sunk the end of the book for me. I may be alone in this- I know I stand on my own island on the topic of Epilogues (HATE THEM)- so this might work for other readers, it just felt like a let down to me.

Alright- 2 small things that I didn't like. Done. Onto the stuff I loved, and there was quite a bit of it. Michele is a pretty great character. She's tough, she's resiliant and she's open minded. She knows what she wants and she's no concerned too much with what those around her think about her. Great, great character. Add to that the introduction of a succession of her Windsor relatives who she visits and you begin to see a long line of independant girls who are worthy of being role models. Despite the assertion that the Windsors are an upper class family and must meet a certain standard, it was refreshing to see that despite the contraints of mulitple eras the Wondsor girls manage to still maintain their own personalities.

It was also really interesting to see Michele grieve for the loss of her mother while trying to adjust to a whole new world in New York City. He grandparents are somewhat stand offish, but they are there for her nonetheless. As the story unfolds and we see who Michele visits in the past and who else may have the ability to travel through time, I was left wondering how much the Grandparents knew or understood. It seems like Michele's mother knew quite a bit, so it will be interesting to see how that part of the story unfolds in the next book.

Of course there is a love interest here- and while it's a good story, about how she manages to help Philip during her foray into NYC of the past, I didn't feel like it was the story. There was so much more going on for Michele and even though this relationship was big for her, I think that finding Philip and then having to deal with the fact that neither truly exists in the same time as the other, was something that helped her deal with other issues, like her mother's death and the father she has never met. I'm sure that as we move into the next book we will see how the relationship plays out, but for now I'll simply say that I liked the two of them together and Philip was a great guy.

Lastly- Time itself plays a big role. I really loved seeing and hearing about the different time periods in NYC. I especially enjoyed the parts in the Cotton Club and how the streets sounded different before the car took over the road. Monir's descriptions were wonderful and those were the parts of the book that I wish lasted a little longer! The idea of time being cyclical, that it the past, present and future exist side by side and overlap is a pretty interesting concept to explore. Monir did a great job intorducing the theories without being confusing or overwhelming the reader. I'm interested in seeing how it all plays out in the next book and if we get an answer to why the Windsor family are the ones who have the ability to move back and forth.

So, bottom line, great storyline, beautiful descriptions of NYC of the past, great main character and a few moments that made me cringe. At the end of the day I really enjoyed the book and if you like time travel this is a pretty good place to look.
Note:
Music plays a pretty big role in this story and Monir has the two songs from the book available for download on her site. Theya re really beautiful songs and Monir is a beautiful singer.