Review: Outside In by Maria V. Snyder 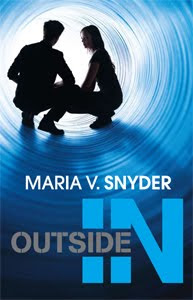 Outside In
By: Maria V. Snyder
Release Date: 3-1-11
Author Website

Synopsis:
Me? A Leader? Okay, I did prove that there’s more to Inside than we knew. That a whole world exists beyond this cube we live in. And finding that led to a major rebellion – between worker scrubs like me and the snobby uppers who rule our world. Make that ruled. Because of me, we’re free. I thought that meant I was off the hook, and could go off on my own again – while still touching base with Riley, of course. He’s the one upper I think I can trust. But then we learned that there’s outside and then there is Outside. And something from Outside wants In. (from Goodreads.com)

Review:
This is the sequel to Maria V. Snyder’s Inside out, a story about a strictly divided and controlled world, and one girl’s journey to tear the walls down, between the uppers and the lowers and between the inside and the outside. We find out at the end of Inside Out that the contained world in which Trella lives is actually a ship and outside is space, so despite taking down the leading class, the Travas, they are still confined to inside.

Outside In picks up pretty much where Inside Out left off. In the aftermath of the rebellion, by the Force of Sheep (love that name), a committee has been created and they are trying to maneuver this new social structure. It’s not easy. There are hard feelings and mistrust from all fronts, and Trella is overwhelmed and doesn’t think she is up to the challenge, especially since the committee doesn’t listen to her. Pretty soon dissent among the lowers is running wild and they feel they situation hasn’t improved at all. On top of all that is going on inside, someone from the Outside wants in and they begin to take control of Inside’s computer system as they prepare to invade. Solving all these problems fills the entire book and it was interesting to see how all of the characters from Inside Out grow into their new roles in Outside In.

Trella was hard for me in this book. She came off childish and whining. She led this rebellion and then seemingly gave up because she either wasn’t up for, or simply didn’t want, the responsibility of actually creating a better world. She treats the Doctor, who is potentially her mother, like the enemy even while taking advantage of the fact that staying with the doctor provides her with a better place to stay. To say the least, I was annoyed by Trella, and I didn’t particularly like her here. By the end I realized that this was by design. I don’t think I was supposed to like her. I say this because one by one the people around her started expressing the same things I was thinking, they were as disappointed in her as I was. In the end we had the old Trella back, leading her friends against an invading force and uniting the community of Inside.

As for whom the outsiders were, well, I’m not going to give too much away. That being said, even after reading the book I wish I knew more about them. Who are they really and where did they come from? Are the Outsiders us? Are the members of Inside us? Are they all us, just spread out over space? These are all questions I was left with as the book wound towards its conclusion. I’m hoping that Snyder will revisit Trella and the rest of the Insiders and answer some of these questions.

** This review was originally written for Eve's Fan Garden. Check out EFG for more great books and an upcoming chat with Snyder! Don't forget to visit the EFG Forums to talk with other book lovers about Outside In. ***
Posted by Kate E. at 12:29 PM