Day 2 is upon us and with it comes more featured authors, more awesomeness and more giveaways! So lets get to it! today I'm featuring Ellen Hopkins, Ellen Schreiber, Shannon Delany and Sarah Rees Brennan.

Fallout
By: Ellen Hopkins
Published by: McElderry
Publication Date: 9-14-2010
Ellen Hopkins Website
Summary: Hunter, Autumn, and Summer—three of Kristina Snow’s five children—live in different homes, with different guardians and different last names. They share only a predisposition for addiction and a host of troubled feelings toward the mother who barely knows them, a mother who has been riding with the monster, crank, for twenty years.

Hunter is nineteen, angry, getting by in college with a job at a radio station, a girlfriend he loves in the only way he knows how, and the occasional party. He's struggling to understand why his mother left him, when he unexpectedly meets his rapist father, and things get even more complicated. Autumn lives with her single aunt and alcoholic grandfather. When her aunt gets married, and the only family she’s ever known crumbles, Autumn’s compulsive habits lead her to drink. And the consequences of her decisions suggest that there’s more of Kristina in her than she’d like to believe. Summer doesn’t know about Hunter, Autumn, or their two youngest brothers, Donald and David. To her, family is only abuse at the hands of her father’s girlfriends and a slew of foster parents. Doubt and loneliness overwhelm her, and she, too, teeters on the edge of her mother’s notorious legacy. As each searches for real love and true family, they find themselves pulled toward the one person who links them together—Kristina, Bree, mother, addict. But it is in each other, and in themselves, that they find the trust, the courage, the hope to break the cycle.

Told in three voices and punctuated by news articles chronicling the family’s story, FALLOUT is the stunning conclusion to the trilogy begun by CRANK and GLASS, and a testament to the harsh reality that addiction is never just one person’s problem.
(form goodreads.com)

I had the good fortune of attending a session at NCTE in November where Ellen Hopkins and David Levithan spoke about censorship. It was awesome and I was stoked to get to meet her afterwards. 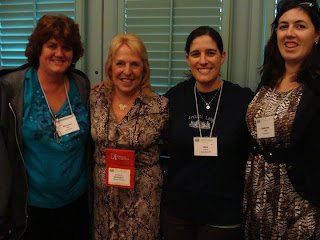 I also had the good fortune of being able to conduct a quick, over the interweb-style interview with Ellen. She was gracious as always!

Did you always want to be a writer?
Actually, yes… ever since I published my first poem, at age nine. Seeing my name in print made me believe I could do it again. Knowing I might get paid for it came much later. Author = within the last decade. Writer = forever.

A few months ago when searching for your books in my library catalog I came across the book Fly Fishing. How did you go from writing books on Fly Fishing to writing YA?
I actually started as a freelance writer, something I did for about fifteen years. From there, I fell into nonfiction for children, mostly because I recognized subject matter in the articles I was writing that might translate well to children’s books. It was a personal story that pushed me into the YA arena. Never headed there consciously. But Crank (my first novel) was a story that needed to be told, and it needed to be told on a YA level. Gut instinct.

Your books are in poetry form, what made you write your books in this format?
I’ve always written poetry, but had never considered verse novel until a series of events happened. I started Crank, my first YA novel, in prose. But the voice was wrong—angry. My voice, not “Kristina’s.” I put the book away and happened to go to SCBWI LA, where I saw Sonya Sones (another verse novelist) present. It hit me that verse would be a good way to tell Kristina’s story, as poetry is an internal form of writing. The book was about how she viewed her world, much more than about what was happening to her. I tried it. Liked it. Found a certain talent for it. The verse does a number of things. Because I write tough subject matter, the white space allows breathing room… many places to pause and consider what you’ve just read. It also adds visual interest for a generation that absorbs information in small doses. And it does pull you inside the main characters’ heads and hearts.

You have said in other interviews that Crank and Glass are loosely based on your daughter’s struggles, and that there are threads of real life in your other books. How has your family responded to parts of their lives being published in your books?
They’re rather philosophical about it all now. Early on, it took some getting used to. But those books have done a lot of good—turning young people away from drugs, giving them insight into loved ones’ addictions, encouraging some to choose a career helping other kids, etc.—that we’ve all come to feel that those six years of hell we lived through have been given meaning.

Recently you were very publicly uninvited to a book festival. Can you tell us a bit more about what happened?
I was first invited to the Humble Teen Book Fest as a speaker in 2009 (it’s semi-annual), but had a conflict. The organizers then asked me to be their featured author in 2011 and I agreed. There was a series of email exchanges, working out travel, honorarium, etc, all finalized last spring. In September, the librarian who invited me emailed to say a middle school librarian saw my name on the roster and, “fearing for the safety of her students” (?!?!?!?!), got a couple of “concerned” parents involved. They went to the school board and the superintendent, “not wanting controversy” told the organizers to uninvited me.

I’ve been uninvited before, and I almost let this one go, except he said two things. 1. That he hadn’t read my books, but rather relied on Internet research (a site that rates content… grrrrr); and 2. “There are more authors out there than we could ever have at our festivals.” The last remark I took personally (hey, I’m not just “any author!”). But the first is all too often the case when it comes to censorship. I organized a boycott by my readers, and let the other authors know I’d done so. Then, one by one, five of the seven remaining authors (Pete Hauptman, Melissa de la Cruz, Matt de la Pena, Tera Lynn Childs and Brian Meehl) withdrew, as a unified stand against censorship. Unfortunately, the festival was canceled. But it was a valuable lesson for teens everywhere. No one person, or handful of people, should be allowed to decide what books everyone can read, or what author everyone can or can’t see speak.

Your books do deal with some controversial topics, and they frequently pop up on challenged or banned lists. How do you feel about the fact that your books bring about that sort of reaction, and are subject to censorship?
I will tell you that I never started writing YA with controversy in mind. I chose to write about subjects that others are afraid to write about. But these issues touch young lives every day, and pretending they don’t won’t help us turn around statistics like: 1 in 4 girls and 1 in 7 boys will be sexually assaulted before they turn 18; or that the average age of a female prostitute in the US is 12 years old. Knowledge is power, and we have to empower our youth so they make better choices. If I didn’t paint accurate, honest pictures of addiction or abuse, my readers would call me on it. Censorship cannot be tolerated. If you don’t like a book, close it. If you don’t want your kids to read it, close it. But don’t dare try to speak for the kid over there, who needs that book, for whatever reason.

If you could give a piece of advice to your readers, what would it be?
To read voraciously. Fearlessly. Read cross-genre, including nonfiction. Books offer insights you can’t get from television (where the visuals are given to you, rather than making your brain work to gain them) or radio (where information is manipulated to create better sound bites) or even your computer, where social networking replaces information gathering. Again, knowledge is power.

Do you have any upcoming releases or projects you can tell us about?
The next YA, Perfect, is finished and in production. (Information about it above). It is set to release in September 2011. A month or so later, adult (and mature teen) readers will find my first adult verse novel, Triangles. It’s about mid-life freak-outs, so three women characters and how they face that transitional phase. The interesting thing about it is, they have teens who are also affected by the issues in the book—infidelity, catastrophic illness, best friend betrayal, etc. So the 2012 YA will be from the POVs of the teens in Triangles. No title for it yet, although I’m considering Angles. This one will cover teen pregnancy, a gay relationship, and best friend betrayal, only younger.

Book Summary: Beware of a kiss under the full moon. It will change your life forever.

Celeste Parker is used to hearing scary stories about werewolves—Legend's Run is famous for them. She's used to everything in the small town until Brandon Maddox moves to Legend's Run and Celeste finds herself immediately drawn to the handsome new student. But when, after an unnerving visit with a psychic, she encounters a pack of wolves and gorgeous, enigmatic Brandon, she must discover whether his transformation is more than legend or just a trick of the shadows in the moonlight.
Her best friends may never forgive her if she gives up her perfect boyfriend, Nash, for Brandon, who's from the wrong side of town. But she can't deny her attraction or the strong pull he has on her. Brandon may be Celeste's hero, or he may be the most dangerous creature she could encounter in the woods of Legend's Run.
Psychic predictions, generations-old secrets, a town divided, and the possibility of falling in love with a hot and heroic werewolf are the perfect formula for what happens . . . once in a full moon.
*********************************

Shannon Delany
Author of 13 to Life and Secrets and Shadows

Book Summary:
(from author's website)
The supernatural stakes are higher than ever now that more than just werewolves prowl the town of Junction--friendships will be formed, choices will be made and allies may become enemies...

Nothing's simple when you run with werewolves. Jess Gillmansen thinks she's seen it all but her eyes are about to be opened to even more danger and a reality far more paranormal than she's suspected.

By Sarah Rees Brennan
Published by Margaret K. McElderry (Simon & Schuster)
Released on May 18th, 2010
http://sarahreesbrennan.com/
Summary:
Mae Crawford's always thought of herself as in control, but in the last few weeks her life has changed. Her younger brother, Jamie, suddenly has magical powers, and she's even more unsettled when she realizes that Gerald, the new leader of the Obsidian Circle, is trying to persuade Jamie to join the magicians. Even worse? Jamie hasn't told Mae a thing about any of it. Mae turns to brothers Nick and Alan to help her rescue Jamie, but they are in danger from Gerald themselves because he wants to steal Nick's powers. Will Mae be able to find a way to save everyone she cares about from the power-hungry magician's carefully laid trap? (quoted from goodreads).
**************************

And now for the giveaway!! I'm really excited about todays contests.

Package 1:
• Ellen Hopkins swag
• 1 signed Limited Edition chapter book of Secrets and Shadows by Shannon Delany
• 1 copy of Once in a Full Moon by Ellen Schreiber

Simply fill out the form below to enter. This contest will run until midnight on December 15th.