Review: The Land of Painted Caves by Jean M. Auel 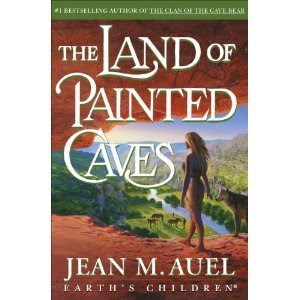 Summary:
(from the cover)What began with the Clan of the Cave Bear continues as Ayla becomes the woman she was meant to be.

(from goodreads)The highly anticipated sixth book of Jean Auel's Earth's Children® series, THE LAND OF PAINTED CAVES, is the culmination fans have been waiting for. Continuing the story of Ayla and Jondalar, Auel combines her brilliant narrative skills and appealing characters with a remarkable re-creation of the way life was lived more than 25,000 years ago. THE LAND OF PAINTED CAVES is an exquisite achievement by one of the world's most beloved authors.

My thoughts: I'm going to break this post down in a different way then I usually do because this series is one that is very special to me. So first I will give some overall thoughts then I'll do a review of this specific book. Hang in there :)

So- as I said this series is very close to my heart. I can remember where I was when I first picked up The Clan of the Cave Bear. Book store, JFK airport, waiting for a flight to the Caribbean for winter break with my family. I was 12. I immediately loved these books. That was 15 years ago. I can remember reading and rereading that book. Then doing the same with the subsequent books. I learned more from these books then from anything else. I learned about being alone and finding strength within yourself. I learned about being an outsider and fighting to fit in. I learned about prejudice and hate and how you have to believe in yourself despite the odds. I learned about love and that families can be made of people who don't look the same or believe the same things. I learned about the birds and bees (I learned alot about the birds and bees...)and how finding the right person can heal old wounds and create new ones. I learned about what it meant to be a spiritual person, which is not the same as being religious, and how having faith can help you survive even when you think it's impossible. I learned about life from these books. Which is funny, because they are about people who lived in the ice age. Which I suppose is a testament to Auel's ability to connect her characters to the readers. Ayla and Jondalar could be living down the street and their journey would remain the same. You can find those parallels if you look and Ayla's journey influenced me in many ways. Things like loving horses and wolves, which were already in my wheelhouse and learning to shoot a bow & arrow because it seemed to me that that's all a spear thrower really is, to carrying an amulet to remind me of important moments and people all came from this series and became part of me. These books really became a part of my life and to this day this is the series that I always respond with when asked what my favorite books are. There aren't many series' which I can look back on and recall names and events years after I read them. I can with these books. I grew up with them. I was stoked to get my hands on The Land of Painted Caves and though I loved it, I'm dissapointed that the series is over. I'm hoping that Auel continues to write and that we haven't seen the last of this world and these people who have become something like family to me. If you haven't read them, I recommend you do, they are worth it.

Review: So, now that we've established my love affair with these books I'm going to take a heard look at the final (say it ain't so!) book in the series. You may be surprised at what I have to say, beacuse I didn't love it 100%.

To start, loved it. How could I not? Still there were some things that rubbed me the wrong way. For me, it was the redundancy in this book. I get why it happens, but it's made the book drag in parts. Let me explain. Auel is a master of descriptions. When Ayla goes hunting and she and Jondalar show someone how to make and use a spear thrower, Auel describes it in such detail that you could probably head out to the backyard and build your own. This is part of what makes these books so magical, because you see and feel everything the characters do. It's amazing. The problem is if you are a huge fan of the series like I am and have read them to the point where you already know the information from previous books. Jondalar and Ayla have been using the spear throwers for years, so we learned how they were built previously, and were already reminded in the last book. For someone like me, I don't need to be reminded again. I could probably explain it myself. The same applies when Ayla thinks back on her time with the Clan, or when she accidently ate the root and went into the cave after Creb, or how she trained her horses, or Wolf, or even Baby her lion. I don't need to be reminded of how she and Jondalar found eachother, or Jondalar was captured by Attora, or really any number of other events that are detailed in this book. I don't need to be reminded because I vividly remember when they happened the first time. Still, what if your not as current on these books? If these events aren't fresh in your memory? I'd imagine that for tose people these passages don't drag at all, and are even really, amazingly interesting. So I get why they are there. With gaps between books of 8 years I understand why you would feel the need to recap certain important events that shape Ayla's actions in this book. For me though, they felt cumbersome and I found myself skimming those paragraphs and pages.

To piggy back on that thought. Holy cow. The desciptions. It was all there. I loved the sections where Ayla is training to become Zelandonii. The things she is learning that I'm not familiar with were so much fun to read about and learn with her. I loved the descriptions of all the painted caves and sacred spots. I was especially moved by Ayla's calling and the events that unfolded from there. Loved it all.

Of course I have to talk about Jondalar, because for so long in this series they have been a pair. Again in this book they struggle and it's easy to forget that during the time this book covers these characters are only between 23 and 26 years old. They seem like they should be older and at some points more mature. They have a child who ages from 3-6 and sometimes their actions come across as so juvenile and petty that you just want to hop on into the book, talk some sense into them and hop back out. Then I remember that they are young, they are a new family, Ayla is still an outsider and they have alot of pressures on them. Especially Ayla who is training to be a zelandonii (aka spiritual leader). They are allowed to screw up and make bad decisions.

I really loved Ayla and Jondalar's daughter Jonayla. She was smart and spunky and independent and I specifically loved the moment she stared down a group of men who were trying to hunt her horses. She's exactly how I hope my daughter will be when she is older.

There were a few other things that bothered me. Mostly they relate to the fact that this is being spoken of as the final book in the series. There were alot of loose ends that were left behind as the book reached it's final pages. Things were brought up and then not resolved. I want to know what happens with Brukeval and Madroman now that they have left the Zelandonii. I also want to know where Jondalar and Ayla go know that they have resolved not only their differences, by agreed to care for anohter family as payment for the fight with Laramar. I read an article recently where Auel said that she doesn't feel that Ayla' story is over yet, and that she will keep writing. I'm really hoping that she not only keeps writing, but shares it with all of us. I agree with her, Ayla's story is not over and I for one would relaly like to know what happens next. I don't even mind waiting another 8 years to find out.
Rating:

Rating Disclaimer:
In the comments the issue of my starred rating came up- honestly, even I questioned it. I just wanted to share what I had to say on the matter:
"On a side note I read and reviewed this book in a span of a few days. I was basking in warm fuzzies of visiting with these characters again. There were, for certain, parts I didn't like and I was dissapointed in, as I noted in my review. Still, I tossed the 5 star out there. I wonder, now that I've had time to reflect, if I wasn't judging based on the good feelings the series as a whole gives me and not the merits of the individual book. I won't change the rating, because at that moment that's how I felt, but it does give a little food for thought on taking the time to really reflect on a book like this where you come into it with a huge bias. "

I've posted more of my thoughts on both the book and my review (and a bit about the discussion) here.
Posted by Kate E. at 7:59 PM