My Ramblings on Shelby and Shauna Kitt and the Dimensional Holes by P.H.C. Marchesi 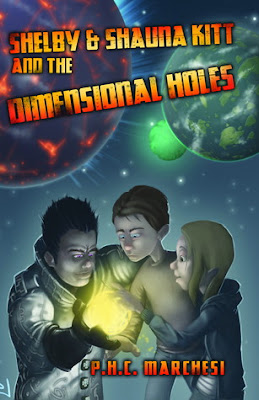 Summary:
Shelby Kitt never gets lost. Shauna, his sister, never gets sick. As far as most people are concerned, the inseparable Kitt twins are odd 13-year-olds. No one, however - not even Shelby and Shauna - can guess how extraordinary they are until the vice consul of Miriax, a planet from another dimension, asks them to take part in a dangerous mission. From that moment on, Shelby and Shauna Kitt discover that the universe is full of klodians, cities in jungles, giant bats, and tea with mushrooms. Most of all, they discover that it will take more than special powers for them to face - and survive - the evil that threatens the galaxy.
My Ramblings:
First I have to say that this poor book has been waiting to be read for months. I recieved a copy from the author and then school got horribly busy then suddenly it was finals and at last I had a 2 week break to read- so this review is a long time coming. This is another book that I probably never would have picked up on my own, it's not my usual reading fare, but I've come to find out that there are so many great books out there if you get lucky enough to stumble upon them. This is just one more of those good book finds!

There were a few little things that I struggled with in this book. For starters, well, the start of the book. In the beginning I was eager to find out about Shelby and Shauna and what these dimensional holes were, but they were nowhere to be found. Instead we are introduced to Marina (a disgraced scientist/engineer) and shortly thereafter we meet Lendox, our first look at an alien from Miriax. All of this introductory stuff seemed low to me, especially compared to the ret of the book. I also had some issues with all the Mariaxian names, which all end with an "x"- while I thought this was a great device to use, you knew right away when something was related to Miriax, at times I felt like I was confusing people or things because the names began to run together for me. Again, these things aren't huge, and other readers might not even be bothered by them, but for me they were little bits that got in the way at points.
That being said, the rest of the book was so much fun! Shelby and Shauna are pretty typical loaners. Not really popular and a bit odd, they stick together against bullies and bad guys and even interdimensional baddies. Their relationship was good to see, I've been liking these family adventures lately, where there isn't one big hero, but instead a group effort in the whole good conquering evil, save the world adventures. I also liked that the powers they discover are awesome, but not so otherworldly that they are not relatable. While we might not all be able to fly a plane on the first try like Shelby, or heal the sick without any training like Shauna, these are skills and jobs that we can aspire too. We can learn to be a pilot or a doctor and save the world in our way. (maybe not form Klodian... although you never know...)
The other place that Marchesi shines in in world building and the explanation of the science behind these interdimensional holes. Not being a scientist myself, I can't really attest to how likely any of it might be, but as a sci-fi geek, I have to admit that I am totally digging the idea that there are other planets out there, in other dimension who wee need to survive. That the balance of power and energy must be maintained for all to survive. Admittedly, I found the idea that the Miriaxan' feed off positive energy and the Klodians feed off the negative energy on earth a but silly, especially at the start, but as it went along I found that it didn't really bother me and that Marchesi wove that idea into the story well, so it worked.
In the end this is a really fun read that has adventure, humor and a few hidden messages about the power of positivity that are worth considering. While I thoroughly enjoyed the book, I suspect that the intended audience (MG) will enjoy it even more!
Posted by Kate E. at 4:02 PM