My Ramblings on Dead Reckoning by Charlaine Harris *NO SPOILERS* 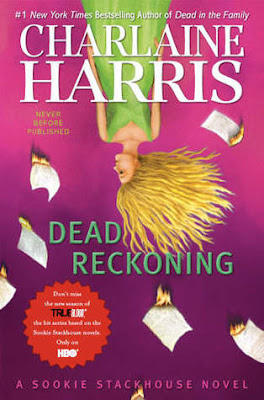 Summary:
With her knack for being in trouble's way, Sookie witnesses the firebombing of Merlotte's, the bar where she works. Since Sam Merlotte is now known to be two-natured, suspicion falls immediately on the anti-shifters in the area. But Sookie suspects otherwise and she and Sam work together to uncover the culprit - and the twisted motive for the attack. But her attention is divided. Though she can't 'read' vampires, Sookie knows her lover Eric Northman and his 'child' Pam well - and she realises that they are plotting to kill the vampire who is now their master. Gradually, she is drawn into the plot -which is much more complicated than she knows. Caught up in the politics of the vampire world, Sookie will learn that she is as much of a pawn as any ordinary human - and that there is a new Queen on the board . . .
My Ramblings:
I want to start by saying that I'm not a huge fan of that summary (from Goodreads and Barnes and Nobles), but I couldn't find a better one, and unfortunately NookBooks don't come with the back cover info. I'm hoping that the hardcopy has a better description on it, because this one just didn't do the book justice. There is so much more going on in this book then is alluded to, and the new Queen it references is a such a small part of it all (although my suspicions are the next book will really look at her).
So with that out of the way, how did this book fare? Basically I loved it! There were a few things I wasn't down with, but in the grand scheme of the series, knowing we have a few more books headed are way, I thought it struck a good note. The main thing I didn't like was that the book really focused on Sookie and Eric (which is NEVER a bad thing), but the lack of some of the other characters left me feeling a bit empty. Where were Jason and Tara? Even though Bill was there, his part was small, and as much as I'm all over the Sookie/Eric relationship, I found myself missing Bill a bit. What the book did deal with, Sookie's fey relatives Dermot and Claude, the return of Sandra Pelt and her relationship with Eric and the blood ties and her place in the Vampire community was done really well. There was a lot of action, which was something I missed in the last book, and I liked seeing Sookie deal with how she felt about the world she was occupying. Mainly, she wants people dead (namely Victor), but isn't sure she should. What does that bit of blood lust say about her? I felt like she was finding her spot in this world finally.
Eric & Sookie together are my favorite of all the pairings (although I do love Alcide as well...)and I thought their relationship took a really great turn in this book. It seemed more, well, human. Eric is dealing with his emotions and so is Sookie, and it was fun to see them trying to figure it all out.
I'd be remiss if I didn't mention my all tome favorite character, who got a ton of play here, Pam. Like Eric, in this book we see a more human side to Pam as she deals with some of the drama and heartache surrounding her current girlfriend. I don't want to give anything away, but let's just say it's emotional and heartbreaking to see her not only trying to back Eric's play, bring down a King (or in this case Victor- Regent of Louisiana, and get the girl. We see her icy wall come fown a bit and it was really refreshing. Of course she was still kicking ass when need be, but the balance was perfect.
Bottom line on this book is that is was wonderful. I can't wait to see where it goes next and how Sookie will deal with the gifts she's been given and the choices she might have to make.
Posted by Kate E. at 2:33 PM