My Ramblings on A Game of Thrones by George RR Martin 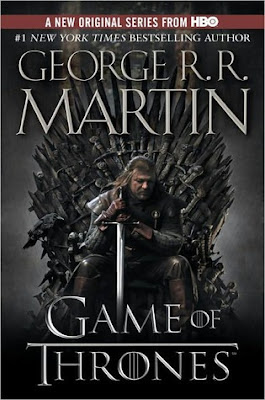 Summary:
Long ago, in a time forgotten, a preternatural event threw the seasons out of balance. The cold is returning, and in the frozen wastes to the north of Winterfell, sinister forces are massing beyond the kingdom's protective wall. To the south, the King's powers are failing, and his enemies are emerging from the shadows of the throne. At the center of the conflict lie the Starks of Winterfell, a family as harsh and unyielding as the frozen land they were born to. Now Lord Eddard Stark is reluctantly summoned to serve as the King's new Hand, an appointment that threatens to sunder not only his family but also the kingdom itself. A heroic fantasy of lords and ladies, soldiers and sorcerers, assassins and evildoers who come together in a time of grim omens. The first volume in George Martin's series
My Ramblings: I had not heard of these book prior to seeing the commercials for the HBO show after an episode of True Blood last summer. It seemed interesting, but not interesting enough for me to keep HBO after TB ended for the season. I admit that I regret that decision. As the run up to the series premier started I began to hear more and more about these books, on facebook and twitter, on EW and other blogs. At the prompting of a few friends I borrowed this book (the first in the A Song of Ice and Fire series)from the library. It was immediately apparent that this was not a book borrow. It was one to own. I didn't want to be rushed through finishing it, it wasn't a one nighter, it demanded to be read slowly and it made me think about each character and storyline. This book, in short, was captivating. I'm a sucker for High Fantasy (and not just for the sex- thanks for making that generalization New York Times- see here for more on that debocle) and Game of Thrones met the mark.
This post could probably go on for pages if I tried to comment on everything. At 787 pages, there is a lot her. There are a few quotes that stood out- one is the Stark motto "Winter is Coming" and the other is "When you play the game of thrones, you win or you die". Those two quotes pretty much sum it up. Dark days are on their way, and everyone is preparing for not only the literal winter that is bearing down, but also war as the struggle to claim the throne begins in earnest. To be sure, everyone is playing the game in one way or another. They want the throne for themselves, their family or for a friend. There is castle intrigue, betrayals, love, lust, double crossing, swordplay and relationships that are forged by blood and by steel. I was struck by how Martin was not afraid to illustrate the idea that you either "win or die", where most would shy away from the death of major characters, Martin doesn't. I was shocked to see people I thought to be invincible (in a literary world) get discarded early and those who I had thought to be more secondary players survive to fight again another day. It kept me interested and it left me wanting more.
This is a great book, and I can't wait to grab the next in the series and see where it goes from here. As for the HBO show, I'm all over it as soon as it's available on Netflix (I know, it'll be a while), but for now I'll revel in the books and the world Martin created!
Posted by Kate E. at 12:00 AM