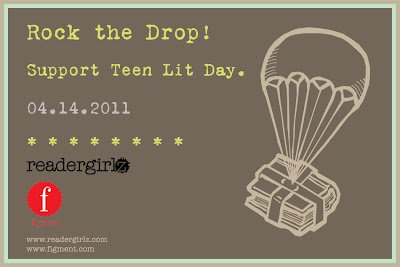 It's time to Rock the Drop in support of Teen Lit Day! This event is hosted by the Readergirlz.
Here's how you can get involved (from their website):
* Snag the banner above, created by the uber-talented David Ostow (who blogs hilarious cartoons here), and add it to your website, linking back to this post to share the love, and proclaiming that you will indeed ROCK THE DROP!
* Print a copy of the bookplate below and insert it into a book (or 10!) that you'll drop on April 14th. Drop a book in a public spot (park bench, bus seat, restaurant counter?) and you're done. Lucky finders will see that the book is part of ROCK THE DROP!
* Snap a photo of your drop and email readergirlz AT gmail DOT com with the pic -- we'll be posting lots of pictures of drops happening all over the world at the readergirlz blog, and our friends at Figment will also be featuring the event!
*****************************************
Of course I had to join in on the fun- so today I raided my bookshelves for unread books that I had multiple copies of(I'm a messy reader- no one wants my already reads...) and came up with Across the Universe by Beth Revis and The Haunted by Jessica Verday! I also pulled out some sweet author swag like bookmarks (some autographed) and stuck them in the pages of the books! 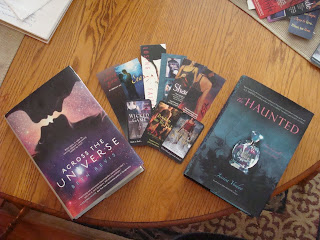 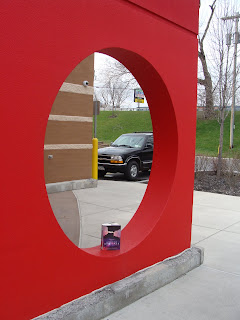 First up was to drop ATU- I knew just where I wanted it to go. Right outside the front of our local Target there are a few benches and and a really cool spot that is essentially a giant hole in a red wall. After school lets out there are always some teens hanging out there,drinking their starbucks and relaxing. So I headed out and dropped Across the Universe literally in the wall. I'm hoping the wind doesn't pick up too much and blow the book right over! 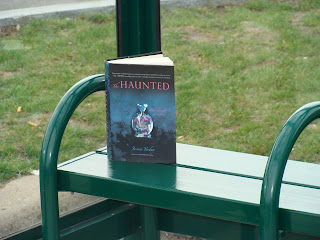 Next I headed toward the bus stop which is nearby to drop Jessica Verday's The Haunted. The stop is always busy, so I was pleasantly surprised to find it empty, which made it so much easier to drop the book and get the picture!
I had a great time participating in Rock the Drop this year. I admit I felt a bit like a caped crusader (you know, minus the cape and any super powers) as I hurridly set up my books and snapped pictures. I hope someone finds the books and loves them as much as I did!
Posted by Kate E. at 2:36 PM