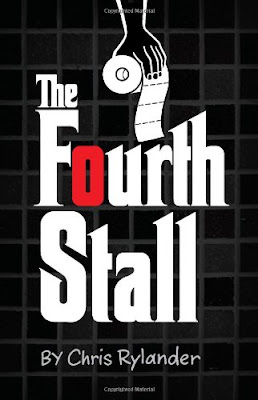 Summary: Do you need something? Mac can get it for you. It's what he does—he and his best friend and business manager, Vince. Their methods might sometimes run afoul of the law, or at least the school code of conduct, but if you have a problem, if no one else can help, and if you can pay him, Mac is on your side. His office is located in the East Wing boys' bathroom, fourth stall from the high window. And business is booming. Or at least it was, until one particular Monday. It starts with a third grader in need of protection. And before this ordeal is over, it's going to involve a legendary high school crime boss named Staples, an intramural gambling ring, a graffiti ninja, the nine most dangerous bullies in school, and the first Chicago Cubs World Series game in almost seventy years. And that's just the beginning. Mac and Vince soon realize that the trouble with solving everyone else's problems is that there's no one left to solve yours. (from goodreads.com)

Review: I've had this book sitting on my shelf for awhile. The cover was pretty great, but for one reason or another it kept getting passed over. Once I signed up for the blog tour I was excited to get to reading. I can't believe I waited this long! I've heard this book described a few different way- as a Ferris Beuller type story and as a Godfather/Mafia story. Both totally apply and the result is a funny, heartwarming, sometimes violent but at all times believable story about being a 6th grader who rules the school and the dark underbelly of the school that you have to deal with. Mac is our main man- he is both Ferris and the Godfather. He rules the school, trading favors with the janitor and working outside the rules from his broke-down bathroom office. He is also the one who everyone turns to when there is trouble- one by one they go into the fourth stall to tell Mac of their troubles, ranging from homework help to money issues, and hope he will help. At his side is his best buddy Vince. Together they call in favors from other members of the school and save their money so they can go to the World Series. Everything was working out fine until Fred, a puny 3rd grader enters the picture, with a tale of the legendary bully Staples and the bookie ring that is infiltrating Mac's turf. Soon, Mac's whole business is in trouble and he might lose everything.
The charecters are really well written. Mac, real name Christian, is a great. At first I scoffed at the idea that a 6th grader could really do all that Mac does, but Rylander employs little side stories that give us all the abckground we need to see how it happened. We find out how his team came together, why the fourth stall is available for his use and how the janitor came to owe him. We even get some pretty great backstories on the other charecters, including nemesis Staples. The more I knew about Mac, Vince, Staples and the rest of the cast, the more I bought into the world Mac occupies, which includes bullies named Kitten (who works for Mac)and middle school bookies on every piece of playground equipment. There is a fair bit of violence in this book. Enough to make you cringe, not neccessarily because it's gratuitous, but because we can all remember these middle school fights (at least I can) Where there was no finesse, you just got right to it, punched as hard as you could, ganged up with your buddies if that's what it took to get the heck out of there, knock-down, drag-out fights. Even if we remember it, it's still hard to read about. Picturing some bigger kids beating up the little guy is hard to handle no matter which way you slice it. To not include it though, would have been shame, because it is the reality for kids (not that it should be) and it certainly fit into the world that Rylander created for Mac.
That's not to say that this is a dark/violent book. For every punch that is thrown there are lighter moments, including Vince and Mac having a catch as they discuss the Fred/Staples problem and Vince compares it to the time her "really wanted barbacue chicken but couldn't because" he "decided to be a vegetarian for two weeks to see what it was like to be a giraffe". For all they act like adults, these moments are great reminders of what it's like to just be a kid.
Before I wrap this up I have to say that I loved the way this book ended. There is a great conclusion to this story, but we are left with a great intro into a sequel when a girl walked in "with damp hair and a swagger that [Mac] found both attractive and unnerving". With that one sentence Rylander had me ready for more. I can't wait for the sequel to see who this girl is and what kind of trouble she gets Mac into!