Color me Offended and the Resulting Changes to A Reader's Ramblings 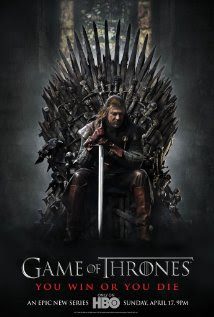 Today I read an interesting article at The New York Times which claims to be a Television Review of HBO's Game of Thrones (read the full article here)
For the most part it reads as a criticism of the whole project- the reviewer isn't a fan, which is totally okay, not everyone will love everything. Then I got to the following paragraphs:
"Like “The Tudors” and “The Borgias” on Showtime and the “Spartacus” series on Starz, “Game of Thrones,” is a costume-drama sexual hopscotch, even if it is more sophisticated than its predecessors. It says something about current American attitudes toward sex that with the exception of the lurid and awful “Californication,” nearly all eroticism on television is past tense. The imagined historical universe of “Game of Thrones” gives license for unhindered bed-jumping — here sibling intimacy is hardly confined to emotional exchange.
The true perversion, though, is the sense you get that all of this illicitness has been tossed in as a little something for the ladies, out of a justifiable fear, perhaps, that no woman alive would watch otherwise. While I do not doubt that there are women in the world who read books like Mr. Martin’s, I can honestly say that I have never met a single woman who has stood up in indignation at her book club and refused to read the latest from Lorrie Moore unless everyone agreed to “The Hobbit” first. “Game of Thrones” is boy fiction patronizingly turned out to reach the population’s other half."
The insinuation here is that no woman in her right mind likes stories like this unless there's some hot sex with hot boys involved. That we, collectively as a group, are champions of the likes of Lorrie Moore- who may be in fact be a phenomenal writer - but I've never heard of her, despite being a fairly well-read person. Thanks to wikipedia I now know that is she is "an American fiction writer known mainly for her humorous and poignant short stories." Great for her, but definitly not my cup of tea. And if I was in that particular book club, you can bet your ass that I'd be standing up and demanding some Tolkien (Silmarillion anyone?)to be included in the required reading. In fact, I'd hope that we'd be reading a wide variety of books- from YA and HisFic, to Fantasy and Chicklit. Of course if there was no chance of that kind of diversity, I probably wouldn't even bother to show up. Maybe that's why "no single woman" has challenged their book club on this, we simply think it's not worth the time. We are probably at home watching Lord of the Rings while wearing our Star Wars t-shirts and hanging out with other sci-fi/fantasy geek girls. In short, color me offended by the insinuation that my only interest in fantasy books, movies and tv shows is due to the sex scenes. To be fair- I certainly don't HATE that there are sexy guys running around, much in the same way that male watchers aren't turned off by they beautiful woman shown on the screen. Clearly this makes me a closet perv who can only be lured in by hot (naked) boys getting it on with anyone they can grab- the world building, the intrigue and the way that fantasy almost always is making a statement about historical events or the current state of the world is obviously lost on me.
Additionally, I worry about what message this line of thinking sends. As someone who is a current Library Student and who harbors a desire to work with Teens in the library setting upon graduation, I cringe when I think of how it will impact girls who like Sci-Fi and Fantasy. If we, as adults are being talked down to because we like this genre, then how will youngers girls feel? To be told that if you enjoy this genre then you must be only interested in the racy, illicit scenes is troubling. It implies that if you do like it for other reasons (as I do) that you are somehow outside the norms for your gender. Don't teens have enough to worry about without having to defend their choice of books, tv and movies to people?
So what does this mean for A Reader's Ramblings? How could it possibly result in changes here?
So here's the deal. My biggest gripe about this article was that it was presented under the guise of a journalistic review. There is absolutely nothing wrong with writing a scathing review about something that you didn't like, so long as you back it up with some sort of facts. When you begin to make broad generalizations without backing it up, as the review here did by lumping women together in an anti-fantasy pile, you cross the fine line between professional review and editorial. This read as the reviewers thoughts and opinions as opposed to a proper review. Immediately upon sharing this criticism with some friends I felt like a hypocrite. Isn't that what I do here everyday, share my personal opinion on books? Sure no one is paying me, but why should they be held to a higher standard then I am? So here we are, and I've decided to make some very small, but I think important changes.
Moving forward:
1. While the posts will not change in terms of what is included (i.e. my personal opinions on the books I read), how I refer to these posts will. From now on they will not be called reviews. Instead every post will be "My Ramblings on [book title] by [author]. It may seem like a small change, but it makes me feel like less of a hypocrite, and since it's my blog, I get to make these monumental, world changing decisions ;)
2. I'm eliminating the rating system from this blog. I don't particularly think it's adding to the posts and I often find it hard to hammer down a starred rating.

So those are my thoughts on this particular article as well as the changes that I'm amking here on the blog. I'd love to hear what you all think- are you offended too or am I totally over-reacting? Where is the line between review and opinion piece and where do we bloggers fit in? Sound off in the comments (but keep it clean!).
Posted by Kate E. at 11:11 AM