My Ramblings on City of Fallen Angels by Cassandra Clare 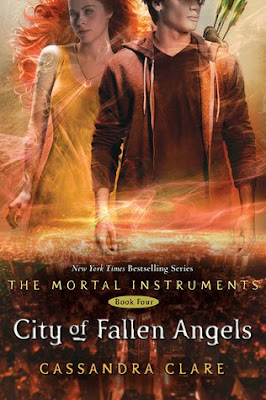 Summary:
City of Fallen Angels takes place two months after the events of City of Glass. In it, a mysterious someone’s killing the Shadowhunters who used to be in Valentine’s Circle and displaying their bodies around New York City in a manner designed to provoke hostility between Downworlders and Shadowhunters, leaving tensions running high in the city and disrupting Clary’s plan to lead as normal a life as she can — training to be a Shadowhunter, and pursuing her relationship with Jace. As Jace and Clary delve into the issue of the murdered Shadowhunters, they discover a mystery that has deeply personal consequences for them — consequences that may strengthen their relationship, or rip it apart forever.

Meanwhile, internecine warfare among vampires is tearing the Downworld community apart, and only Simon — the Daylighter who everyone wants on their side — can decide the outcome; too bad he wants nothing to do with Downworld politics. Love, blood, betrayal and revenge: the stakes are higher than ever in City of Fallen Angels. (from Goodreads.com)

My Ramblings:
Cassandra Clare is one of my favorite authors. Her books are fun to read and Clare somehow takes some pretty crazy plot lines and charecters and makes them seem believable. It's really pretty amazing. Picking up City of Fallen Angels was like hanging out with old friends. Even though it's been awhile since I read the first three books in this series, it all came back pretty quickly.
This book picked up roughly where the last one left off. Simon was trying to figure his life out, how to be a vampire, how to deal with the Mark of Cain and more importantly how to deal with his new ladies man status! I personally really enjoyed his relationship with Isabelle, she's tough as nails, but I felt like we were starting to see the cracks a bit with her in this book. She's been through a lot and as a Shadowhunter is expected to just continue forward, but it was refreshing to see her keep her strength, but also be a little vulnerable with Simon.
The remainder of the supporting case was great as always. I enjoyed the addition of Kyle and his backstory to the group. I thought it was done in a way that made it important, so he didn't feel like a random additions, but instead a crucial part to unraveling the entire story. Alec and Magnus were great, I can't help but love them. I always feel like they have the most normal relationship of the bunch, and then I remember that Magnus has been around for centuries and isn't altogether human. I also was excited a the mention of Will (from Clockwork Prince), I'm hoping that further ties between the two stories will be revealed as both series go forward.
Of course the relationship between Jace and Clary is center stage and I have to say (and I may be in the minority here), I just dind't feel it in this book. I get that Jace is moody and he doesn't think he deserve's Clary. I also get that his dreams are being influenced by a power he can't even imagine, but after 3 books, I was a little tired of him. (I know, I know, blasphemy!)
Lastly, I have to say (without giving anything away) that I LOVED the ending. Based on the flurry of tweets following the release, I'm pretty sure I am in the minority here. As the book began to draw to a close and we got some insight into who was influencing Jace's dreams and the reasons behind why he was ignoring Clary, I began to guess at what was going to happen. I was fairly certain I knew where it was going. I was wrong. There's nothing I like more then when an author surprises me. The return of old enemies, the fall of one hero, the rise of a new one- I didn't see it playing out the way it did. It absolutely made the book for me. I can't wait to see where it goes next!
Posted by Kate E. at 9:25 PM