My Ramblings on 13 Little Blue Envelopes by Maureen Johnson 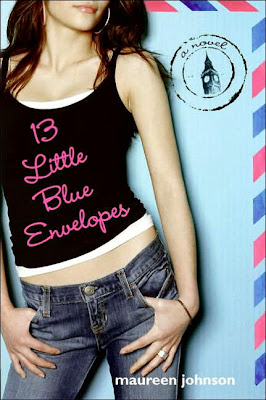 13 Little Blue Envelopes By: Maureen Johnson Release date: October 1, 2006 Author Website
Summary: When Ginny receives thirteen little blue envelopes and instructions to buy a plane ticket to London, she knows something exciting is going to happen. What Ginny doesn't know is that she will have the adventure of her life and it will change her in more ways than one. Life and love are waiting for her across the Atlantic, and the thirteen little blue envelopes are the key to finding them in this funny, romantic, heartbreaking novel.(from goodreads)
Review: I'm not going to lie, I had a lot of trouble with this book. As a broad concept I loved it. Ginny, a shy teen from New Jersey, recieves a package from her Aunt instructing her to pack up and ship out to Europe where she will follow in her Aunt's footsteps on a bit of an adventure. She will inevitably learn something about the world and about herself. LOVE IT. In fact I kind of want to do it too. The people she meets up with along the way are interesting, I especially liked the group she hooks up with from Australia, and I found that I believed these relationships easily. I also really liked Kieth and Robert, who become a bit of surrogate family to Ginny as she completes the tasks laid out by her Aunt.
There's the rub though. Family. Ginny has one back in Jersey. She's got parents and a best friend. She is instructed via the package from her Aunt that on this trek she is not allowed to contact her family at all. Not by phone or email or text. It's radio silence. This one concept killed this book for me. For all the actual trip seemed plausible I had trouble believing that a girl of 17, who had never travelled before, let alone by herself, would be allowed to hop a plane on a whim and follow some letters to god knows where without being able to check in with her family. Maybe it's just that I can't seperate the way my family would have acted from how I think Ginny's family should have. I was allowed to travel quite a bit while in high school, but there would be hell to pay if I didn't check in a few times a day. Just a quick "hey, I'm alive, having fun, going to dinner, talk to you later." We don't get a whole lot of info about Ginny's family beyond the fact that her Mom dissaproved of the way Aunt Peg lived, but that fact was enough for me to feel like Ginny's Mom wouldn't have bought into the whole premis of the tour of Europe, alone, without checking in every now and then. I do realize that she was able to write good old fashion letters, since she sent a few to her best friend, but no where in the book is there mention of her writing to her family.I just didn't buy it.
I know that I just ranted a bit here on this point, but it really bothered me. It's also one of those aspects that might not bother other readers at all! If not for that one little thing I think I would have REALLY loved this book. The writing was good and the charecters were really well developed and relatable (although I do wish Ginny had taken advantage of her surrounding a little more). I liked the adventure of it, the going where the letter takes you and even how Ginny didn't see the forest for the trees until the very end. There was a lot there to latch onto.
So in the end- I didn't like one specific part of this book, but if you look past that, there is a lot to really like and enjoy. I'd say grab it up if you can and give it a read. I know that despite the issues I had here I will still be reading the sequel The Last Little Blue Envelope when it comes out later this month to see how the story ends.
Posted by Kate E. at 12:09 AM