Dead in the Family 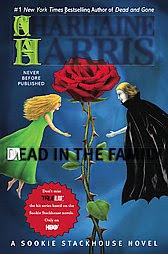 Dead in the Family
By: Charlaine Harris
www.charlaineharris.com

Sookie Stackhouse has finally settled into a relationship with the Viking vampire Eric, and her errant brother Jason seems to have his life in order, too. But all the other people in Sookie’s life – Eric himself, her former lover Bill, her friend and boss Sam – are having family problems. Eric’s maker shows up with Eric’s ‘brother’ in tow, the ailing Bill can only be healed by a blood sibling, and Sam’s brother’s marriage is about to take place... or will it? The furor raised by the coming out of the two-natured has yet to settle; some people are just not ready to sit down to dinner with a man who turns into a dog. And Sookie herself is still recovering from her last ordeal. She’s definitely improving, physically and mentally, but she’s always going to have some dark moments now. The werewolves tell her that there have been strange and ominous passers-by in the Stackhouse woods; now Sookie is about to come face-to-face with one of her more distant relatives...
************************************
So this is going to be one of my rare *meh* reviews. I love the Sookie Stackhouse series. LOVE. This book however, just didn't do it for me. There were some things that were great, which I'll mention later (end on a high note right?), but the vast majority of the book was kind of blah to me.

A few negatives before the positives. I thought this book ahd way too much crammed into it. WE had Sookie's recovery, her relationship with Eric, Eric's maker and brother (who happens to be a Romanov), the Were's issues, Claude moving in, Dermot showing up, two dead bodies, FBI agents, Bill's long lost vampire sister/lover, Tara's pregnancy, Jason's new relationship, Sam dating a were, and old lady Bellefleur on her death bed. Did I forget anything? This is the problem for me. So many little story lines, but nothing felt cohesive to me. I missed having the big mystery for Sookie to solve, or challenge for Sookie to overcome. Everything seemed a little too easy, and I felt like it was because there was so much going on that we never really got enough detail on any one thing.
Some positives: I liked that we got little insights into the history of some of the vampires. Seeing Eric's maker and the effect that he has on Eric was interesting. As Eric is seen as strong and flappable, it was a nice change to see him on the edge of losing control. Getting a little bit more about Bill's past and where he came from was great too. I felt like this book was setting him up for a new relationship, which is good because it free's Sookie up to really explore what her feelings are with Eric (outside of the bond).

I'm hoping this book is just serving as a bit of background history and filler before the next book. Answering a few questions so that we can move forward in the storyline. This probably could have been accomplished through outtakes on the website, or a few short stories, instead of an entire book though. If I had to sum it up I'd say that this was a good book, but not a great one. I'm glad I own it because it is part of the set, but I kind of wish I had waited to buy until it was out in paperback.
Posted by Kate E. at 8:47 AM