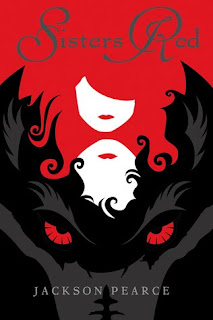 Summary: Scarlett March lives to hunt the Fenris-- the werewolves that took her eye when she was defending her sister Rosie from a brutal attack. Armed with a razor-sharp hatchet and blood-red cloak, Scarlett is an expert at luring and slaying the wolves. She's determined to protect other young girls from a grisly death, and her raging heart will not rest until every single wolf is dead.

Rosie March once felt her bond with her sister was unbreakable. Owing Scarlett her life, Rosie hunts fiercely alongside her. Now Rosie dreams of a life beyond the wolves and finds herself drawn to Silas, a young woodsman who is deadly with an ax-- but loving him means betraying her sister and has the potential to destroy all they've worked for.

Review: I really enjoyed this book. I picked it up on Monday and when Mockingjay showed up Tuesday I set it down. In taking that break, I was worried that I might lose interest in Sisters Red, but I didn't. As soon as Mockingjay was finished, and my review was posted, I was anxious to get back to Scarlett, Rosie and Silas, and see how it all ended. While vastly different from Mockingjay, Sisters Red held it's own.
I really liked how this book took a well known story (Little Red Riding Hood) and made it into something new. Instead of sticking closely to the original tale, Pearce took just enough to make feel familiar and then went her own way, creating great charecters. Our three main charecters were Rosie, Silan and Scarlett, each touched by the Fenris. Scarlett is left with scars, both physical and emotional, after an attack that left her Grandmother dead. Scarlett defended her younget sister Rosie against the Fenris, and from that point forward has made it her personal mission to kill the Fenris, angling for revenge against the pack that killed her Grandmother. Silas is a neighbor, friend and hunting partner and for Rosie, something more.
I appreciated the fact that Pearce didn't shy away from showing the after effects of that initial attack and how each person handles it differently. Scarlett is left with a single minded determination to kill all the Fenris. She trains and hunts and fights, both for revenge, but also to try and keep others from experiencing what she did, especially Rosie. For Scarlett the hunt and Rosie are her life. Silas hunts because it's what he has always done, but he wants more. Rosie hunt's because it's what Scarlett wants and because she knows that with the knowledge that the Fenris exists she ahs a responsibility to do something about it.
Rosie was my favorite charecter. I loved that she was shown as someone who is struggling with what her responsibilities are, and how they effect what it is she really wants out of life. With Silas pushing her in one direction and Scarlett pushing her in another, Rosie is kind of stuck between a rock and a hard place, and I enjoyed seeing her figure it all out. I also really loved what I'm calling a love triangle, although it's an untraditional one. The obvious move would have been to make both Scarlett and Rosie want Silas, but Pearce avoided that trap (thank goodness). Instead we see Rosie torn in two as she is pulled between Silas who may be her perfect match, and Scarlett, her sister who she is closer to then anyone else in the world. I felt that although Scarlett is the leader in their little pack, it's Rosie who is really the main charecter who has to find her way and figure out she is.
(SPOILER ALERT- I tried a few times to write this section spoiler free, but couldn't. So if you haven't read Sisters Red yet, you may want to go ahead and skip this paragraph!)
The thing I appreciated the most was Silas' storyline and that while I guessed fairly early what he was, I didn't anticipate how the whole storyline would end. With Rosie captured and then escaped and the three facing off against a huge pack of Fenris, I didn't see a happy ending. In fact I was sure that Silas was a goner and that's where the sequel would head. How would Rosie and Scarlett move forward with Silas on the other side. It wasn't until Scarlett told both Silas and Rosie that it was okay, that I realized that it really was okay. With so many cookie cutter YA books out there, I've found that it is easier and easier to figure it out before the author wants you too, so I was loving that fact that Pearce got me. So to that I say "well done!".
The other thing I will mention (however, briefly, as I wrote an entire blog post on this already today) is Pearce's awesome epilogue. I hate epilogues, but this one was spot on. It jumped ahead just enough that we see how the three are coping and what they are doing, but not so far ahead that I felt I was missing something. It made the book for me.
Overall, I liked this book alot. It's sometimes hard to redo a classic fairy tale, but I think Pearce did a great job. This story really looks at how loss can effect each of us differently, how the bonds that hold us together can change, and how we deal with adversity when it's staring us in the face. I can't wait to see where the story goes from here.
About Jackson Pearce:
Blog/Website
Twitter
Facebook
You Tube
Rating: