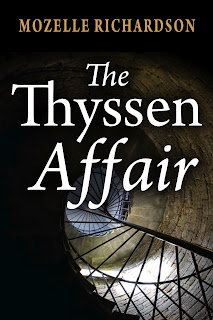 Summary:
Canyon Eliot, Colorado rancher and ex-OSS WWII agent is brought back into action by a CIA friend to do a simple investigation in Munich. The problem: nothing is simple. For the first time in his career, Canyon feels like a newcomer. As someone well-known to be on top of his game in the spy business he is befuddled to find himself tracked down and set-up without any inclination of who is behind it all. In this exciting, fast-paced thriller he must go by his wits and not by his jaded experience as he enters the convoluted and twisted world of intrigue with both the Israeli Mossad and the Russian KGB.
Review:
I really enjoyed this book. As a history geek, this book really sucked me in and I flew through it. I really enjoyed the main character Cane- he made me think of James Bond mixed with Indiana Jones and a little bit Roger Murtaugh (Lethal Weapon "I'm getting to old for this shit"). Cane has long since retired to his Colorado ranch and he isn't really into being pulled back into service, but when his late son's best friend Peter asks him for help, he simply can't resist. Pretty soon he is trying to figure out who stole the skull of a WWII POW from Ft. Reno in Oklahoma, why they wanted it. Pretty soon he finds himself tangled up with Isreali Mossad agents and the lovely Anya, a KGB spy, all after the same skull. It was fun to see Cane, once on the top of his game, stumble his way through this investigation. He seemed like someone who knew what he was supposed to do, but was always a step behind, yet still managed to pull through anyways.
One thing I really appreciated was all the history that you got out of this book in addition to a great story. Cane travels all over the world, Bavaria, Italy, Oklahoma and takes on the persona of big game hunter in Alpendorf, Geologist in Italy and Oktoberfest worker. not only did the author have to know who Cane was as a Colorado rancher, but who his persona's were as well. Add on top of that Anya's persona's and all the stories that her and Cane told eachother and you could have ended up with a really commplicated and confusing story. Richardson kept it simple though and I didn't ever feel like I was lost. I liked the twists and turns this allowed for in the story.
As soon as I finished the book I handed it over to my husband, who is also a history geek, not to mention a huge Bond fan, I can't wait to see what he thinks of the book!
Rating: