My Ramblings on The Lives We Lost by Megan Crewe 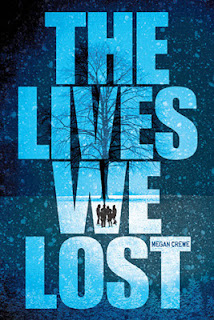 First, the virus took Kaelyn’s friends. Then, her family. Now it’s taken away her home.

But she can't look back—the life she once had is gone forever.

A deadly virus has destroyed Kaelyn’s small island community and spread beyond the quarantine. No one is safe. But when Kaelyn finds samples of a vaccine in her father's abandoned lab, she knows there must be someone, somewhere, who can replicate it. As Kaelyn and her friends head to the mainland, they encounter a world beyond recognition. It’s not only the “friendly flu” that’s a killer—there are people who will stop at nothing to get their hands on the vaccine. How much will Kaelyn risk for an unproven cure, when the search could either destroy those she loves or save the human race?

Megan Crewe's second volume in the Fallen World trilogy is an action-packed journey that explores the resilience of friendship, the ache of lost love, and Kaelyn’s enduring hope in the face of the sacrifices she must make to stay alive.

I've been very, very impatiently waiting for this book to come out, technically I should still be waiting, but by an excellent stroke of luck I got the book from NetGalley. I was actually terrified to start it- I was so in love with the first book that I was concerned this book would disappoint me. It's happened before. Great first book, downer of a second and then by the time the third comes out you're only reading to know the ending.This book absolutely lived up to every high expectation I had.

When we last saw Kaelyn, Tessa, Gav and Meredith they were coping with their whole world falling apart and seeing Leo, Kaelyn's old best friend for the first time since the virus began. With Leo's arrival they also learned that the rest of the world is no better off then the island, and this knowledge changes everything.

This book follows the group as they leave the island sooner then anticipated. Their journey to the mainland is pushed forward by two things. One, Kae has found the vaccine her father was working on (and it seems to work) and two, the island in under attack. It's go or die. Unfortunately they don't know exactly what they will face on the mainland, and over the course of their journey they realize how bad it is everywhere.

At the end of the last book I particularly concerned about Kae's brother Drew, who disappears and we get no closure on him at all. Luckily his story is touched on here. We don't get an entire picture of what happened to Drew when he left the island, but we do get enough to know that he made it to the mainland in tact. Beyond that, you'll have to read to find out! We also pick up some new characters and leave others behind. Tobias, who defected from the military, is the one who warned them of the oncoming attack and helped them off the island, and once he hitched his wagon to Kae's train, he was on board for the long haul. He was a great addition to the group and it lent a level of believability to having 4 teenagers heading off on foot across several Canadian Provinces. They needed someone with Tobias' abilities, and by having him be at first a rescuer and then a full-fledged member of the party worked really well.

Despite the fact that they have a vaccine and that at least 2 members of the group (Kae and Meredith) are now immune, the virus and death still play the central role in the story. Nobody isn't touched my the disease. Everyone's actions are dictated by either fear or determination, both of which are a response to the illness. Even in the small group that travels with Kae there is sickness, I'm not telling you who... but it's there and how they choose to deal with one of their own being sick is hard to read.

There was another moment that struck me. A lot of times the title comes from somewhere in the book. Sometimes I pick up on it and sometimes I don't (or it's not there). In this book it's one short line, one little comment, but it resulted in a little bot of an "aha" moment for me. When I saw the title I immediately assumed it referenced all the lives that were lost in the epidemic. The people who died either from the actual disease or from the violence that followed. But the actual line was much more poignant. At one point Kae reflects on the how different her life would be if the virus hadn't been spread and she comments on "the lives we lost", not the actual loss of life, but the loss of the lives they were living and the loss of innocence. I kind of love that I totally misread the title to start, because it made the actual moment in the book where it emerged much more impactful.

Much like in the last book Crewe manages to end the book with just enough of a cliffhanger that I really, really want more (right now). Enough story lines were tied up that I felt satisfied with the ending, but there were a few that are just cut right off. At the end of the last book I said "But what about DREW!!!" and then scoured the internet until I was content with the knowledge that this was a series and there would be more to come. This time I flipped that last page and thought "WHAT?! That's it, what about _________?!?!" I'm not going to tell you what fills in that blank because it gives away too many plot points... but suffice it to say I was left feeling like there was so much more to the story, but at least this time I know that there is another book on the way which will, eventually, make me very, very happy.