My Ramblings on Wolf Storm by Dee Garretson 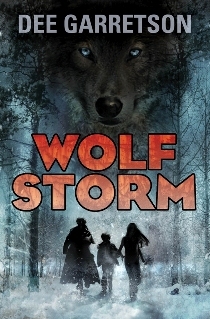 
This is Stefan's big break. He's on location in the mountains far from home for his first movie role, filming a blockbuster sci-fi adventure. The props, the spaceships, and the trained wolves on set should add up to a dream job, but acting turns out to be much tougher than he ever imagined, and he feels like his inner loser is all that's showing through. From the way his famously stuck-up co-star, Raine, treats him, he's pretty sure she thinks so too. And worst of all, no one will believe his claim that there are wild wolves haunting the forest around the set.

When a blizzard strikes, isolating the young co-stars and bringing hungry feral wolves into the open, Stefan must take on his biggest role yet--working together with his co-stars to survive. With no second takes, they only have one chance to get it right.

Dee Garretson takes suspense and danger to new heights with her thrilling tale of friendship and survival against all odds. (from Goodreads.com)

My Ramblings:
This was a quick and easy read that packed a punch. Centered on Stephan, a young actor taking on his first role, the story hits on a number of elements including relationships, a survival story, and him being a fish out of water and it does it all well.

The author does a nice job of weaving the story together, spending just enough time on Stephan's experiences on set, dealing with rude co-stars and the pressure of getting things right for the camera or risk losing the job. The author hints that Stephan's movie career will be a game changer for his family, his mother is home working and he is there with his aunt. His mother couldn't miss work, so it gives you sense that the money that Stephan will make will change everything for his family, even though the author never explicitly says that. It adds to the pressure that Stephan feels. The relationships that Stephan builds (or tries to avoid) during the first part of the story carry the plot believable into the "surviving a disaster" portion of the book.

As for that section- it's again really well done. Not only do Stephan and his two young co-stars (and one older co-star) survive an avalanche brought on by a blizzard, but they then have to figure out how to deal with wild wolves who are desperate for food while trying to figure out a way to get to help and safety. By keeping the time frame fairly short (a matter of days) and by referencing back to things the characters have learned about survival (like "a wild animal that will approach you in the daylight and without fear is desperate. Get away.") made it believable that these three kids could survive this disaster.

This isn't to say that they don't face serious danger. Besides the wolves there are fires, explosions, more snow, extreme cold and hunger. AND they have to find a way out since they have no way of knowing if anyone is coming for them. The only thing that irked me a little about this book is that I felt like the resolution came too quickly. There was a lot of build up and then... it was over. I won't tell you haw it all resolved, but I can say that I felt like it wrapped up to quickly and neatly for the story that came before it. Maybe that's just me as an adult reading it wanting to see more action and tragedy come out of it, so I won't knock it too much. This is a book for Middle Schoolers and in that respect it was well done. The story managed to get a lot into a short number of pages and I really appreciate that.
Posted by Kate E. at 9:28 AM