My Ramblings on Hokey Pokey by Jerry Spinelli 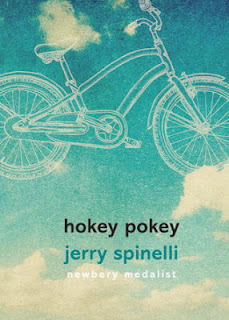 
Welcome to Hokey Pokey. A place and a time, when childhood is at its best: games to play, bikes to ride, experiences to be had. There are no adults in Hokey Pokey, just kids, and the laws governing Hokey Pokey are simple and finite. But when one of the biggest kids, Jack, has his beloved bike stolen—and by a girl, no less—his entire world, and the world of Hokey Pokey, turns to chaos. Without his bike, Jack feels like everything has started to go wrong. He feels different, not like himself, and he knows something is about to change. And even more troubling he alone hears a faint train whistle. But that's impossible: every kid knows there no trains in Hokey Pokey, only tracks.

Master storyteller Jerry Spinelli has written a dizzingly inventive fable of growing up and letting go, of leaving childhood and its imagination play behind for the more dazzling adventures of adolescence, and of learning to accept not only the sunny part of day, but the unwelcome arrival of night, as well. (from Goodreads.com)

My Ramblings:
What a strange and wonderful book this is. I'm a fan of Spinelli so when I got the opportunity to pick up this book I was very excited. I'll be honest though,  this was a hard, hard book to get into. It started out almost too strange for me, in fact I wasn't even sure what I was reading. Was Jack a real boy? Was this a fantasy land? Are they toys? Who are all these kids just running around unsupervised? I almost put it down. Then I took a peak around online just to see what what others though of this book. Every where I looked people were saying the same thing I was thinking... but then they said "keep reading" "it's worth it" "it will all make sense". So I did. And it did. And it was so, so wonderful.

Yes, Jack is a real boy. And the world he lives in, Hokey Pokey, is also real, but we, as adults have forgotten it. It's the world we all lived in back before we worried about school and sports, about who likes who and who hates who and before we had jobs and bills and responsibilities. It's the world where racing your bike so fast it feels like you're flying is the best part of the day. It's where spinning in circles until you are so dizzy you can't stand straight could occupy hours. It's where you drop and sleep whenever and where ever the mood hits you because you can't possibly take another step. And then you get up and do it all again the next day. As I read the book I started to remember moments from when I was a kid- racing my bike pretending it was a horse and we were out on the range.  Flinging snakes (yes, snakes) at the younger kids just to watch them run away. (it wasn't too mean- they were just little snakes and not poisonous). Running all over town from one backyard to the next just playing all day. My kiddo (3) is firmly living in Hokey Pokey right now- as they said over and over in the book "if you believe it, it's real. If you don't believe, its not." (paraphrased there a bit- but the sentiment is the same). My kiddo believes, but someday she won't anymore. Or she will and she just won't have time to play like she used to.

The same way Jack begins to grow up and readies himself to leave Hokey Pokey. He can sense something is happening, but isn't sure what. He just knows things are no longer the same. We know, because some of us have been there already, that what Jack is starting to realize is that he's getting to big for some of the things you do in Hokey Pokey. It doesn't hold the same magic for him anymore and soon, he'll have more and more responsibilities and less and less time to just play all day.

Basically this book perfectly captures that moment in time when you stop being a little kid and start being a little adult. It's sad, but there are new adventures on the horizon. You say goodbye to some friends, but they'll catch up to you eventually and you'll get to have all new memories to make. It's a great book that starts out odd, but when you finish you realize it was exactly right all along. I can't wait to pass this title along to friends and tell them "Keep reading. It's worth it.".