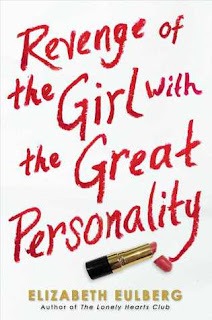 Revenge of the Girl with the Great Personality
By: Elizabeth Eulberg
Release Date: March 1, 2013
Author Website
Book provided by NetGalley

A hilarious new novel from Elizabeth Eulberg about taking the wall out of the wallflower so she can bloom.

Don't mess with a girl with a Great Personality.

Everybody loves Lexi. She's popular, smart, funny...but she's never been one of those girls, the pretty ones who get all the attention from guys. And on top of that, her seven-year-old sister, Mackenzie, is a terror in a tiara, and part of a pageant scene where she gets praised for her beauty (with the help of fake hair and tons of makeup).

The time has come for Lexi to step out from the sidelines. Girls without great personalities aren't going to know what hit them. Because Lexi's going to play the beauty game - and she's in it to win it. (from goodreads)

My Ramblings:
There are a few authors that I can trust to deliver a great book every time. Eulberg is one of them. Without fail her books have been in my best of the year lists every year. Her characters are dynamic and her story lines are so easy to relate to. This time we find Eulberg and her characters entering the terrifying world of pagents and it's so good.

At the heart of the story is Lexi, a girl who seems to have a pretty good life from the outside. She's got a good job, great friends and a plan for the future. On the surface this story seems to be a fun coming of age story centered around the world of pagentry. Once you delve in though and begin to chip away at Lexi and her life you begin to see that all is not what it seems. Lexi is a pretty typical high school girl, especially when it comes to her crush Logan. She knows she can't have him, and she doesn't even try to get him, but boy does she think about it a lot! Part of what makes Logan so attractive to her is that he completely understands the strange world of pageants. Lexi and Logan spend every weekend watching them, Logan for his girlfriend and Lexi for her little sister Mackenzie.


Despite being into fashion design Lexi is as far from a pageant girl as you can get, until her best buddy Benny decides that it's time to change their fate. He'll start talking to his crush Chris if Lexi will break out of her drab streak and glam it up for school. With that one decision Lexi's world begins to change. Suddenly people are noticing her, her dreams start to come true and everything starts to come together. Until it starts falling apart. I won't give you details, but suffice it to say that Lexi has to decide what is most important to her. She can get the things she wants, but she might lose herself in the process.

Lexi's family is a whole other ball of wax. It was very interesting to watch it all fall apart around her. Her mother is everything you don't want in a parent. She is living vicariously through her younger daughter and destroying their lives in the process. What started as a fun activity for everyone has turned into a train that is set to run over their whole family. The lengths to which Lexi's mother goes to keep that train running is terrifying. Seeing Lexi step up to save her family on the other hand is inspiring. In then you find yourself hoping that everything that Lexi has learned will help her and her sister come out of the pageant world in tact and better for it. You don't get complete closure on all the story lines, but I liked that. It gives you a sense that although their story isn't over that they are prepared to handle it, and that they will, eventually, be okay.

What I really liked about this book is that it dealt with some serious issues with humor, but without turning it into a joke. This is something that Eulberg is particularly adept at and it's definitely on display in this book. In short, another great book by Eulberg and I can't wait to see what she has up her sleeve next!