Day Five: It's our final feature of the week! I chose to end off the week with one of the most disturbing and entertaining books I read this year, The Way We Fall by Megan Crewe. This book really made me think and when it ended I was so upset because I wasn't ready to leave these characters or this story. 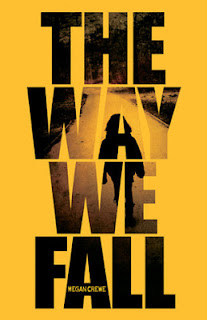 It starts with an itch you just can't shake. Then comes a fever and a tickle in your throat. A few days later, you'll be blabbing your secrets and chatting with strangers like they’re old friends. Three more, and the paranoid hallucinations kick in.

And then you're dead.

When sixteen-year-old Kaelyn lets her best friend leave for school without saying goodbye, she never dreams that she might not see him again. But then a strange virus begins to sweep through her small island community, infecting young and old alike. As the dead pile up, the government quarantines the island: no one can leave, and no one can come back.

Those still healthy must fight for the island’s dwindling supplies, or lose all chance of survival. As everything familiar comes crashing down, Kaelyn joins forces with a former rival and discovers a new love in the midst of heartbreak. When the virus starts to rob her of friends and family, she clings to the belief that there must be a way to save the people she holds dearest.

Because how will she go on if there isn't?

Poignant and dizzying, The Way We Fall is the heart-wrenching story of one girl's bravery and unbeatable spirit as she challenges not just her fears, but her sense of what makes life worth living. (from goodreads.com)

Way back in March The Way We Fall was the book of the week over at Eve's Fan Garden, another blog that I work on. I spent an entire week featuring all the awesomeness that is this book and author Megan Crewe. Here's what I had to say about the book back then...

First off, I've always been a fan of stories where the characters really learn something about themselves and do something they never thought they could. Plus I love movies like Outbreak and Contagion. So really this book was made for me! The story follows Kaelyn and her journey as the small island she lives on becomes the epicenter of a deadly virus. The story is laid out in a series of letters from Kaelyn to her used to be best friend, who left the island for school on the mainland. It was a really interesting way to read a story, because we not only see her dealing with the realities of life during an epidemic, but we also get some insight into things she regrets, and things she would do differently if given the chance. We see her deal with death first hand and we watch as she makes decisions that are, quite literally, life or death. Who do you trust in these situations?

Crewe does an excellent job in showing all the different ways people react in a situation like this. The reactions of the community range from blind trust of the government who should be coming to save them, to wary acceptance of the situation all the way to outrage and anarchy as some people go so far as shooting those infected with the disease in hopes of stopping the spread of the virus. We get a good look at the full spectrum of human reactions to something like this. I found myself wondering again and again what I would do. How far would I go to save the people I love? This book definitely made me think.

Beyond that we got to see some great relationships. Kaelyn's realtionship with her family is great (which I always appreciate) and her willingness to form bonds with people she might not have liked before, but who she may need now, was interesting to watch. And the ending... the ending. Wow. To be clear, this book, in terms of the story of the epidemic, really wrapped up nicely. We get a sense that Kaelyn will be okay, she'll never be the same, but she'll get by. What we didn't get was a clear picture on some of the other character- most specifically Drew, Kaelyn's brother. I'm not going to give away what Drew did during the story, but needless to say I wanted to to know how it all turned out! Initially I thought this was a stand alone (and might have freaked out a bit), but then someone mentioned it was a series and all my fears subsided. It was a great way to end the book. You were happy with where most of the characters were, but there was enough left up in the air that you really wanted more!

****
Looking back I have to say that this book is still as captivating today as it was when I first read it. I still want to know what happens next and what life will be like for all these characters now that the initial epidemic in waning. Was this just the start of something much, much bigger? I'm not so patiently waiting for the Feb. 12th release date of the sequel The Lives We Lost!

The Contest:
That's right everyone- one fabulous part of Best I've Read is that there are a ton of giveaways. On my site, on the main BIR site and on all the other participating blogs sites. What could be better then free books right before the holidays!

Rules of the game: All contests will end at midnight on Friday the 21st. Books will be shipped directly from the publisher, so your information will be shared with them in order to get you your prize! Prizes will most likely not be mailed until after the 1st of the year, so hang in there, they will come! Winners will receive an email from me Saturday the 22nd and you will have 48 hours to claim your prize, so check your mailboxes. This contest is open to entries from the US or Canada!

<  Don't forget to check out all the other participating blogs:
Best I've Read 2012
Page Turners
Portrait of a Book
Mundie Moms
Books Complete Me
Reading Lark
Once Upon a Twilight
Cindy Thomas, YA Author
I Am a Reader, Not a Writer
Amethyst Daydreams