My Ramblings on Leverage by Joshua C. Cohen 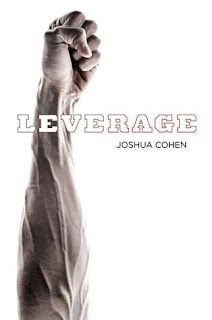 The football field is a battlefield

There's an extraordinary price for victory at Oregrove High. It is paid on - and off - the football field. And it claims its victims without mercy - including the most innocent bystanders.

When a violent, steroid-infused, ever-escalating prank war has devastating consequences, an unlikely friendship between a talented but emotionally damaged fullback and a promising gymnast might hold the key to a school's salvation.

I finished this book a few weeks ago and instead of reviewing it right away I wanted to sit on it, to think about it, and to really take the time to process it. I have a lot to say, but, to be honest I'm unsure how to say it, or even if I want to. Here's why: part of what this book have such an impact is that you are experiencing right along with the characters both the good and the bad in this world. I'm afraid that if I go too in depth, if I give too much away that I will also take away the impact of the story and that would be unfair. I know, I know, this book is 2 years old. why worry about spoilers at all? Well, because in this case I think it really could ruin the book for you. So I'm going to keep it broad.

This book centers on two high school boys, Kurt a football player with demons lurking in his past and Danny, a gymnast who is faced with a world that at best doesn't respect him and at worst wants to hurt him. Laced into the story is violence, steroid abuse, corruption, bullying, people who do nothing when evil rears it's head and those that take a stand against it. When one of Danny's team mates is raped, Danny has to decide what to do next. Watching Danny struggle with this decision is heart breaking and terrifying. you want to say that these things don't really happen, that the author is exaggerating or ramping up the situation to create drama or tension. He's not though. As disgusting as some of the actions portrayed in the story are and as much as they make you want to close the book and find lighter fare, you know that somewhere this is actually happening to someone and it's heartbreaking. Think of Stuebenville (to reference a more recent case). Think of how children are abused by adults, think of how they abuse each other, and think about how, sometimes the bad guys get away with it. This book goes through all of that and allows you a glimpse into the minds of those who are stuck in the middle of the cycle and want desperately to get out.

This is a great book. It wraps up just a little to neatly for me, but I imagine that after the last page turns, the ones who deserve it will get what's coming to them and those that were harmed will know that even though evil wins some of the smaller battles, eventually the right side wins out.
Posted by Kate E. at 1:26 PM