My Ramblings on Hysteria by Megan Miranda 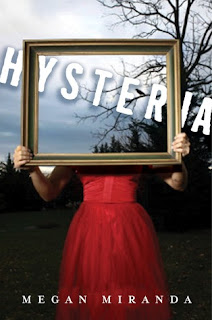 Summary:
Mallory killed her boyfriend, Brian. She can't remember the details of that night but everyone knows it was self-defense, so she isn't charged. But Mallory still feels Brian's presence in her life. Is it all in her head? Or is it something more? In desperate need of a fresh start, Mallory is sent to Monroe, a fancy prep school where no one knows her . . . or anything about her past.But the feeling follows her, as do her secrets. Then, one of her new classmates turns up dead. As suspicion falls on Mallory, she must find a way to remember the details of both deadly nights so she can prove her innocence-to herself and others.

In another riveting tale of life and death, Megan Miranda's masterful storytelling brings readers along for a ride to the edge of sanity and back again. (from goodreads)

My Ramblings:
I read this book way back in January and was super excited to review it... then I got an email about participating in a blog tour so I held off.  I was worried initially that I wouldn't be able to remember the plot or the characters after all this time, but that really wasn't the case at all. Instead I found myself thinking about the book during the last few months, really looking forward to reviewing it and remember the things that really stood out about the book. It was really interesting trying to hold off the review. Now, I know I could have reviewed back in January and just scheduled it to post today, but I'm really glad I didn't. The waiting gave a different perspective on the book and it was kind of fun to look back when thinking this post out, instead of just sharing my immediate, off the cuff thoughts. So, here we go.

It's at the new school where the action and the mystery really ramps up. What I really loved about this book is that you see the story unraveling the way Miranda does. She has know idea what happened so as she begins to uncover little pieces, as she starts to remember, you, as the reader, begin to piece it all together as well. Often times books that center around a mystery try to pack in too many twists and turns OR the mystery is too easy to solve. This book does cram a lot in, there were a few moments as I was reading that I felt like it was too much and I got a bit confused about who was doing what and how it was all connected. However, Miranda really ties it all together in the end. This was one of the few times where as it pulled together I really went "Woah!" It sounds a bit cliche, but it really did all make sense in the end.

Mallory as a main character is great. You really get the sense that she is right on the edge. She really doesn't know what is real and what is in her head, and you can see her grappling with her own sanity. Calling a book "Hysteria" holds a promise of the what you're going to find inside. Mallory's struggle definitely hold up to the promise. What I particularly liked was that not only weren't we sure whether Mallory was losing it or not, but neither was she. She actively acknowledges that fact. She questions her own sanity and she struggles with what it might mean if she is in fact losing her mind.

The story about the school and everything that happens there is well constructed as well. There's a murder and a mystery and Mallory has to try and tie it all together before it's too late. She's obviously the easy scapegoat, and even she isn't 100% sure she isn't involved.  It all adds to her confusion and distress and she has to balance those feelings with her desire to figure it all out.

I also really loved the resolution of this story. The truth about what happened between Mallory and Brian was not what I expected. I don't want to give anything away, but part of it was easy to figure out. Any time that you see "self-defense" and "boyfriend" in the same story, you're mind (or at least my mind), goes directly to abusive boyfriend, and that's part of it, but Miranda makes it much then just that. Others are involved, there's a back story that brings them to that point that isn't just "over possessive guy pushes girlfriend too far" and I really, really appreciated that.

Overall this was a wonderful book. The story flows and it draws you in so quickly that you lose yourself in it. I can't wait to read more from Miranda.

Check out this great trailer for Hysteria