My Ramblings on Dead to You by Lisa McMann 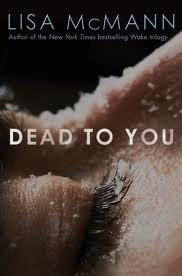 Ethan was abducted from his front yard when he was just seven years old. Now, at sixteen, he has returned to his family. It's a miracle... at first. Then the tensions start to build. His reintroduction to his old life isn't going smoothly, and his family is tearing apart all over again. If only Ethan could remember something, anything, about his life before, he'd be able to put the pieces back together. But there's something that's keeping his memory blocked. Something unspeakable... (goodreads.com)
My Ramblings:
I love Lisa McMann. I love her books. I get a lot of eBooks instead of paperbacks now, but for books I know I'm going to like I just buy, so I can have them on shelf. Obviously I bought this book. Hardcover even. That's how confident I was that I was going to love this book. I was right, this book is made of awesome. Except the end, which I hated. But I'm getting ahead of myself.
So this book takes a look at what it's like when a child returns home after being abducted. In this case it's Ethan. He was taken at age 6 from his front sidewalk where he was playing with his younger brother Blake. He doesn't remember much from his life before abduction, and he has mixed memories of his time with his abductor Ellen. Understandably he also has mixed feelings towards her. Does he love her or hate her? Can he understand why she abandoned him at a group home (from which he ran away)? The story starts as Ethan returns home having found his family through the internet. Obviously this isn't an easy transition, especially for Blake. What follows is a look at the fallout. Pent up and deep buried emotions come out and everyone is trying to figure out their place in this new family unit.
This is going to be a super short post because I don't want to give anything away- but needless to say everything is not what it seems. I had an idea how it was going to end and I was fairly correct, but the way McMann ended it, the way it leaves you mid scene, wanting to know what happens next was totally surprising. I hate the ending for the best reasons possible. It worked on so many levels, except the one that gave me all the answers I was looking for. Think the ending of The Sopranos... something is about to happen and then black. That's how I felt here. I was totally annoyed that I wasn't going to get the answers I wanted right then and there, but the more I thought about it the more it all made sense. So basically it was a spot on ending that made me mad!
Posted by Kate E. at 7:34 AM

Labels: Dead to You, Lisa McMann