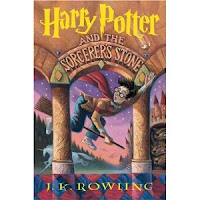 Harry Potter and the Sorcerer's Stone
By: J. K. Rowling


Summary:
Harry Potter has never been the star of a Quidditch team, scoring points while riding a broom far above the ground. He knows no spells, has never helped to hatch a dragon, and has never worn a cloak of invisibility.
All he knows is a miserable life with the Dursleys, his horrible aunt and uncle, and their abominable son, Dudley—a great big swollen spoiled bully. Harry's room is a tiny closet at the foot of the stairs, and he hasn't had a birthday party in eleven years.
But all that is about to change when a mysterious letter arrives by owl messenger: a letter with an invitation to an incredible place that Harry—and anyone who reads about him—will find unforgettable. For it's there that he finds not only friends, aerial sports, and magic in everything from classes to meals, but a great destiny that's been waiting for him... if Harry can survive the encounter.
My Ramblings:
And so the summer of Fantasy and Magic continues. Although if I was being honest with myself, it would be called the "summer of Fantasy, Magic and a ridiculous amount of homework", but I'm picked these books to read as an escape from all that homework, so let's forget it even exists.
On Thursday it all ends. No more books, no more movies, no more magic of the Hogwarts kind. Thank goodness we have Pottermore to look forward to, because at least it's something. For right now though, reading Sorcerer's Stone with Part 2 looming so near seemed fitting. Do you remember the first time you read it? The first time you imagined getting your own invitation to Hogwarts? I don't really. I think I was a senior in high school- so I was a good 3 years behind the game. I read the books right after I saw the first movie. So for me, Harry will always be Daniel Radcliff, Snape will always speak with that voice of Alan Rickman's and Hogwarts will always look the way it does on film. Of course this doesn't take anything away from the reading of the books because these are some beautifully and loyally made movies. They don't disappoint in any way.
How about the book though? Does it hold up after all this time? Obviously, the answer is yes. A million times yes. It was just as magical to read it this time as it was 10+ years ago. I found myself marveling over the lack of sympathy shown by the Dursley, hating Draco from the word go and falling in love with the trio of hero's that we find in Harry, Ron and Hermione. It was if I had no idea how it would all end, even though I do. That says a lot about Rowling's writing and the world she created.
There were other moments that once you know how they end, you can't really ever un-know, it changes the way you see the characters and their actions. You can see their motivation and their destiny now in a way that wasn't clear on the first read. I'm thinking, of course, of Professor Snape and Neville Longbottom. They have such a pivotal role by the end that seeing them for the first time here in Sorcerer's Stone takes on a new meaning because you see them as they will be instead of how Harry is seeing them for the first time. Can I again say that this says a lot about Rowling's writing and the world she created? I get the feeling that she knew from the first page where these characters would end up.
I think it's only fair to say that I love these books, I love this series, I love these characters and I'm not nearly ready for it to all end. As an almost 30 year old I still wish that I'd get my invite to Hogwarts. What a fabulous first stop on one of the best series I've ever read. Can't wait to pick up The Chamber of Secrets in a few weeks and of course to see Part 7 in a few days. I can't think of any other way to end this then to say Thank God for J.K. Rowling for giving us all a little bit of magic.
You've read Harry Potter right? If not, I can't say enough times, do. Read it. I hope you love it as much as I do!