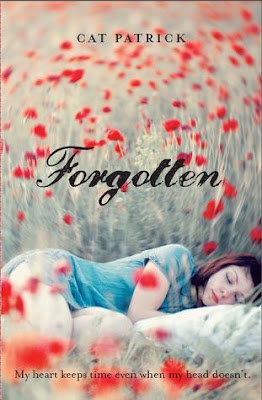 Summary:
Each night when 16 year-old London Lane goes to sleep, her whole world disappears. In the morning, all that's left is a note telling her about a day she can't remember. The whole scenario doesn't exactly make high school or dating that hot guy whose name she can't seem to recall any easier. But when London starts experiencing disturbing visions she can't make sense of, she realizes it's time to learn a little more about the past she keeps forgetting-before it destroys her future.

Part psychological drama, part romance, and part mystery, this thought-provoking novel will inspire readers to consider the what-if's in their own lives and recognize the power they have to control their destinies.

Review: This is the first book I read in 2011 (yay!!!) and I had really high hopes for it- and by and large it lived up to those hopes. The premis really captured my attention- what if you couldn't remember the previous day? and more interestingly to me, what if on top of that you did remember the future? The possibilities were limitless. London is a really engaging charecter as well- you quickly bond with her and want her to figure her life out. Still, the book was really slow going for me for the first part. It was good, but it was put-downable. Meaning I didn't need to finish it one sitting, it simply didn't engage me to that level. I think it was because it was fairly mundane and repetative for a lot of the beginning. Since you can't get background information from someone who doesn't remember her past, instead we got to know London by seeing her everyday. At school, with her friends, with her Mom, etc. We are learning how London's mind works, how she keeps track of people and events even though she doesn't remember them. She has a supportive mother and best friend who know about her memory issues and even snags herself a great boyfriend who she is able to keep her affliction from. She has a recurring dream of a funeral, but there isn't quite enough there to go on.

However, once some answers start popping up, and more information is revealed, the book really gets good! I don't want to give anything away, but once we see what the dream really is, who her boyfriend really is (hint- he's from her past, she just doens't remember him!) and the potential reason why London's brain works the way it does the book really picks up. Once I hit that section I got that gotta read it now to see what happens feeling that I love! I particularly liked the mystery of the story, which obviously centers around her brain function because it quickly morphed from a medical issue to a psychological one that had far reaching implications for her whole family.

Again, without giving too much away, the book ends with a bit of a cliff hanger on the family front, and I'm hoping that we see a sequel out Patrick that gives us some familial closure as well as a chance to see how London functions now that she knows why her brain works the way it does.

In the end this book was pretty good. It was slow to start, but once it got in the groove it really clicked along. I enjoyed it alot and again- hoping for a sequel!