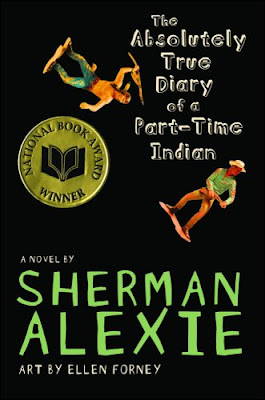 Summary: Sherman Alexie tells the story of Junior, a budding cartoonist growing up on the Spokane Indian Reservation. Determined to take his future into his own hands, Junior leaves his troubled school on the rez to attend an all-white farm town high school where the only other Indian is the school mascot. Heartbreaking, funny, and beautifully written, The Absolutely True Diary of a Part-Time Indian, which is based on the author's own experiences, coupled with poignant drawings that reflect the character's art, chronicles the contemporary adolescence of one Native American boy as he attempts to break away from the life he thought he was destined to live.
(from goodreads.com)

My thoughts: A year ago this week I started this blog- the first book I reviewed was Part-time Indian. It's not the best review I've ever written (I was a newbie, what can I say?) but my opinion of the book remains the same. This is one of my all time favorite books, from one of my absolute favorite authors. I was shocked to find out that not only was it challenged, but that it had successfully been banned from 2 High Schools. The book is written from the perspective of a 14 year old boy, and Junior deals with all the things that 14 year old boys deal with along with all the added things that kids on reservations deal with. I thought the book was hysterical. I read it while in the hospital and I can tell you that the nurse came in to check on me because I was literally laughing out loud and reading passages to my husband (who was trying to sleep). I think I ended up reading almost the entire book out loud- there were that many pages that I thought were worthy! To ban the book because one person thinks it's "trashy" is a shame. There is so much to be learned from this book- from what it's like to be picked on, to be an outsider, to be a reservation kid. The fact that Alexie has the ability to relate all these really serious issues to the reader without sacrificing humor and compassion is something that makes this book so special.