A Touch of Dead 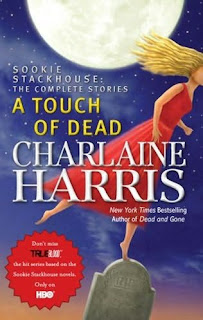 A Touch of Dead
By: Charlaine Harris
www.charlaineharris.com

Did I say I was done with the Sookie books? Yeah...I was wrong. Of course I had to go grab the complete stories. That's why it's called an addiction, you can't stop yourself. Now I have to be content to sit and wait for that box from Barnes and Nobles to come with Dead in the Family sometime in early May!

At any rate, this collection holds five short stories. For the most part they were pretty good. I wouldn't say they were awesome, they read as almost out takes from the full series, but they did provide a few extra moments with the charecters.

"Fairy Dust" finds Sookie summoned by Claudine to help figure out who killed her sister Claudette. While the plot, and the outcome, were pretty standard fare, I liked this story beacuse you found out a little more about Claudine, her family and their business. I was happy to see where and how Sookie first got introduced to Claude as that was something I actually thought about when reading the series.

"Dracula Night" brings us a story about Fangtasia and Eric's fan-boy obsession with having Count Dracula attend his Dracula Night party. Sookie is invited to the party and ends up helping Eric as an imposter is discovered in their midst. This was another cute story, and frankly, any story that has more Eric in it is okay by me. Plus we got more Pam, which I always enjoy.

"One Word Answer" told the story of when and how Sookie heard about Hadley's death. What I liked most about this story was that it brigged the gap in the series, filling in more detail about Sookie's first encounter with the Queen of Louisiana.

"Lucky" was probably my least favorite of the five stories. I liked it as I read it, but just now I had to go look up whatit was about. It got kind of overshadowed by the other stories- at least in my mind. This story found Sookie and Amelia looking to help out Sookie's insurance agent as he tries to find out who broke into his office and if his magical abilities might be part of the problem

Lastly was "Gift Wrap"- this book brought no major revelations to the overall plot of the series. Instead we Sookie looking to help out a wounded were, and get a little extra christmas gift on the side in the process. I've seen that a lot of people like this story, but I'll admit that Naill's part in the evening left me a little skeezed out.

One thing I did appreciate was that in the intro we were told where each story fit into the over all Sookie Series, so if you wanted to you could re-read the whole series, inserting the short stories as you went along. Overall it was a good rainy Saturday read. Now...how much longer until Dead in the Family is released?
Posted by Kate E. at 11:16 AM