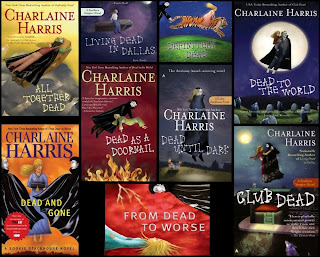 So normally I start my post with a description of the book, but since this is an entire series, and I've yet to come across a desription of the entire series, I'm just going to dive right in.
I really did obsessively read the entire 9 book series in about a week. In fact I picked up the last book (so far), Dead & Gone, yesterday around 5 and finished around 10, with a nice dinner break in the middle.
These book center around Sookie Stackhouse, a barmaid at Merlotte's, in Bon Temps, LA. Sookie is telepathic and has always beena bit on the outside. When Vampire's announce their existance to the world, and Sookie takes up with local Vamp Bill Compton, she is dragged into a world she never knew existed. Throughout the series Sookie is involved in the lives and issue of not only the vampire community, but also the Werewolves, Shifters, Witches, Faeries and the all to real prejudices that abound in normal life. On top of that are her various romances with Bill, Eric (Bill's vampire boss), Alcide the Werewolf, Quinn the Weretiger and others. There is lot's of action, both in an out of the bedroom. These books are definitely for the more mature reader!
What I love about these books is that they are written for the adult. Not that I don't love the YA that is out there (because I most certainly do), but it is fun to read stuff with a little more "adult content"! I also appreciate the overall campiness of the series. It kind of has an "everything but the kitchen sink" feel to it, which is excellent, because you're never quite sure what's going to happen to Sookie next, or who she might meet, because Harris has created an everything goes world that exists side by side with the real world.
The next book of the series, Dead in the Family, comes out May 4th and I can't wait. Based on how the series has gone so far I hope that Harris continue's to crank out the hilarious (and scary) adventures for Sookie for more books!
Harris has a fabulous website which has a community forum, that if you like the books are worth checking out.
The series has also inspired the HBO series True Blood (which I'm also loving, although, love the books more). HBO is currently running season 2 reruns on Sundays @ 8:00 with the new season starting June 13th.
Here are the books (in order) for the series so far:
Dead Until Dark
Living Dead in Dallas
Club Dead
Dead to the World
Dead as a Doornail
Definitely Dead
All Together Dead
From Dead to Worse
Dead and Gone
Posted by Kate E. at 11:05 AM