My Ramblings on Griffin's Storm by Darby Karchut 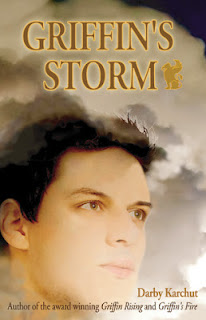 
An old enemy returns. A new alliance is formed. And Griffin finds himself in the eye of the storm when an ancient racial hatred is set loose, jeopardizing the very existence of the Terrae Angeli.

Once again, the teen guardian angel is forced to battle his worst nightmare. But this time, Griffin comes back swinging. With a vengeance.

It's no secret that this series is one of my favorites. There are so many things about the entire thing that I love. The fact that amid all the otherworld aspects swirling around Karchut manages to keep it all completely believable is fantastic. The issues that our young hero, Griffin, faces are so relatable to teens (and the inner teen inside all of us) that you get drawn in very quickly to the story. You want to see Griffin succeed in what he's doing, whether it be his relationships with girlfriend Katie or sometimes nemesis Sergei or with trying to face down an old enemy.

In this installment we see Griffin gathering his allies around him to face down his old mentor who has officially gone rogue and who is trying to eliminate the "lesser angels" from the earth. His first target is, of course, Griffin and Basil. Together, along with some old friends (like Sergei and Sukalli) and some new ones, Basil and Griffin make a stand. It's great to see Griffin's circle expanding as he learns to trust and lean on more people and to get a payoff from that.

While I've always praised Karchut for having a great family system (even if it is a makeshift and sometimes messy one) I was struck by something different while reading this book. When I read the first two books I was a student on my way to getting my library degree. Now I'm a full fledged Librarian in a city middle school. For me I saw so many of my students in Griffin. Griffin's first mentor Nicopolis abused him in the first book. Both mentally and physically. Griffin arrived on Basil's doorstep a broken teen. He was afraid, he was unused to love and he desperately needed to learn how to trust again. By the end of this book we see Griffin truly coming into his own. He's not only able to acknowledge that he has people around him that he can turn to and lean on, but he's beginning to trust that they will not hurt him. He's gaining confidence and strength and is finally able to look his abuser in eye without fear and know that he is worth it, that he is worth people risking their own lives to help and protect. There are kids everywhere that come in through the school doors broken, who don't know how to trust, who have suffered things worse then we can imagine, but who still walk in the door every day willing to give it another go round. I think that my kids need these books. I think they'll see themselves in Griffin much more acutely then I do, and I think they will be able to look at his journey and be able to see the hope that it offers for better days and better relationships to come.

My vendors don't offer these books for sale, so I'm buying my own set and donating them to my library. I think they are that worthwhile. So again... bravo Darby. Another fabulous book in a series that continues to impress me.
Posted by Kate E. at 4:03 PM