My Ramblings on Griffin's Fire by Darby Karchut 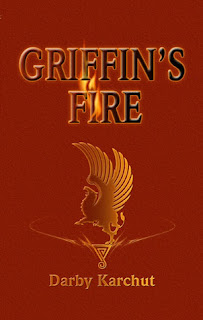 
For centuries, there have been rumors about a lowly caste of supernatural beings known as the Terrae Angeli. Armed with the power to control Earth, Fire, Wind and Water, these warriors and their apprentices clandestinely serve as guardians for humans in danger.
Forced to become mortal, ex-teen angel Griffin has been banished from the Terrae Angeli. Struggling to adjust, he enrolls in the heaven-and-hell known as high school. In spite of his friends’ support, Centennial High proves to be a battleground, complete with a malicious math teacher.
And to make matters worse, his Mentor, Basil, has been ordered to take on a new apprentice, the gifted and egotistical seventeen-year-old Sergei, whose covert attacks make Griffin’s home life as bleak as a Siberian winter.
Caught between school, Sergei, and a desperate secret, Griffin is certain of one thing: the only way to fight a Cold War is with Fire. (from goodreads.com)
My Ramblings:
First of all- I love these books. I read book number one, Griffin's Rising last year (review) and immediately was drawn into not only the story, but the relationships. I was stoked when Darby sent over an advanced copy of Griffin's Fire, because I wanted to know what would happen to Griffin now that his identity has essentially been taken away from him. What will he do know that he is no longer an angel?
What I liked about this story is that it jumped right back in seamlessly. I was instantly back into the story and the relationships and there was no confusion or trying to remember what had happened, despite the fact that I haven't picked up Griffin's Rising in almost a year. We find Griffin trying to deal with his new found mortality, and he's doing it with all the grace and maturity expected of a 16 year old boy, in other words, he's miserable and he's making sure everyone else knows it. More interestingly we see how Griffin's new status (and mood) are affecting those around him through journal entries. We see Basil trying to raise a happy teenager instead of an angel in training and we see Katie trying to be a good friend and help Griffin deal without putting on too much pressure. It's the relationships that really make this story special.
I went on a tangent with my first Griffin review, but it bears repeating again here. I find the characters in this book refreshing. They all have issues, but their issues are realistic. Basil and Griffin don't always get along, but they love each other and at the end of the day Griffin knows that Basil will always have his back, even when he does monumentally stupid things and make horrible decisions. Griffin might second guess it, but Basil never does (and therefore neither do we). The same with Katie's family. They are well adjusted and accepting. They are the kinds of friends Griffin needs, and again, even when things go bad (like when you find a 16 year old boy asleep in your daughters bed), they manage to be both responsible parents and understanding to what Griffin is going through. I like seeing all the healthy relationships in these books. Sure there are bad guys, but the good guys win by working together and trusting each other, something that I think is missing in other books. Plus I love good parental units. Not every main character needs to be struggling against his parents, and Basil is a great parent.
Now, besides the great relationships, we also get a really good story. Nicopolis is still out there, but we see the truth come out, and there is a backlash of sorts against the punishment that was dealt out to Griffin. They regret taking his angel status away, and even though it can't be reversed, they are doing all they can to bring Nicopolis to justice. The bad guy in this story is less of an actual monster and more of Griffin struggling against himself. Sergei, Basil's new Tiro is there to turn the screws and make Griffin doubt himself, but he is more of a classic bully then an actual evil guy. It was really interesting watching Griffin navigate real teenagedom (like high school...shudder) while still having one foot in the world of angels.
It all wraps up nicely in the end, but there is still a hint at what might be to come. Griffin is more secure in himself and has made a wider circle of friends (I particularly like Cas and his family) and is coming to terms with who and what he is, and who and what he could be. Plus, Nicopolis is still on the periphery and I think that before all is said and done we will see that relationship come to a head with exciting and possibly devastating results. I, for one, can't wait!
Posted by Kate E. at 9:49 AM