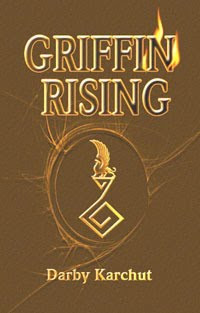 Summary:
For centuries, rumors have abounded of a lowly caste of supernatural beings known as the Terrae Angeli. Armed with the power to control Earth, Fire, Wind and Water, these warriors secretly serve as guardians for mortals in danger.

But for one young angel-in-training, Griffin, life is hell as a cruel master makes his apprenticeship a nightmare. On the verge of failing, a new mentor, Basil, enters his life and changes it forever. It is their father-and-son relationship, sometimes turbulent, often hilarious, always affectionate, that sings through the story like a pure note.

Masquerading as the average teen next door, Griffin struggles to learn his trade, navigate the ups and downs of modern life among humans (including falling in love with the girl next door), and prepare for the ancient trial-by-combat every apprentice must pass at sixteen or be forced to become mortal.

Review:
This book surprised me. It sounded like an interesting concept- a young angel training to become a full blown guardian angel, while also trying to navigate life as a regular 16 year old. The book started out slow for me- it jumped from the present to 3 years in the past and back a few times. Those leaps lost me a bit at first, I found myself flipping back and forth to make sure I knew where I was and who I was reading about. Especially given that Griffin refers to both Nicopolis and Basil as mentor and they refer to him as both Griffin and Tiro. It took me a minute to become comfortable with the names and titles. Once I got that though (and it really didn't take long)the story really clicked along.

I loved the character Griffin and his relationship with Basil, a man who took him in as a apprentice when Griffin was broken, both physically and mentally. It's their relationship that really made the book for me. They seem exactly like what they are- they are student and teacher, but they are also family. Basil rescued Griffin and helped rebuild him into a confident teen who is ready for his final test before becoming a Guarduan Angel. I liked that they were dealing with all this extra stuff, saving lives, training, keeping Nicopolis from ruining it all, and yet at the heart of their relationship they were dealing with really normal father/son type things. Dating, manners, run of the mill teenage attitude problems, etc.

Katie, the girl next store, or in this case, across the street, was a great character as well. She was a new girl who didn't suffer from insecurity. She knew who she was and what she wanted and I really felt like her comfort with herself rubbed off on Griffin who was so used to second guessing himself. Katie's, parents Lewis and Helen, were also pretty great. Lewis is a professor at the nearby University who specializes in, you guessed it, Angels. With this family, after some initial awkwardness, Griffin and Basil find a safe haven. A place where they don't have to pretend to be something they aren't, a place where they are accepted. It's fabulous.

I'm going to take a little detour here and talk about something I really love about this book. I'm probably going to go off on a tangent, but humor me for a minute. This book had one thing that I find so lacking in other YA backs. Good, supportive, and loving parents. So often we see absentee parents or abusive ones, and we see our main charecters, generally teens, struggling to not only deal with whatever issues they have (Vamps, werewolves, any number of paranormal oddities) but also with really crappy homelives. They have no one to turn to except for a few friends and ultimately their significant other- whose love is all encompassing. It's all very wonderful and romantic- but why do we have to have these horrible parents? This book goes the opposite route and it was so refreshing. Yes, Griffin had a horrible time wih his first mentor Nicopolis, he was abused and left broken. For three years he suffered, and then...Basil. Basil who is compassionate and understanding, supportive, sympathetic and patient. He is willing to put the time in to make Griffin into not just a good Angel, but a good man. We see much of the same with Katie's parents. They are fiercly protective of her when they think she's been hurt or is in danger, but they are also accepting and tolerant and teach Katie to be careful of judging someone just because she's skeptical of who they might be. In this case, an Angel. All three parents in this book are loving to their children and also respectful of them as people. I can't say enough about how much I loved that about this book. Because those parents are out there too, and they are there to help their children through the rough times, and I was extremely glad to see them get their due here.

Okay then, tangent over, moving on...
Now that all that is out of the way, I have to say that this books is fun and full of adventure and humor and has a twist at the end that I didn't think the author would have to go guts to go for. I can't wait until the next book in this series comes out to find out where Griffin goes from here.