My Ramblings on Everything I Was by Corinne Demas 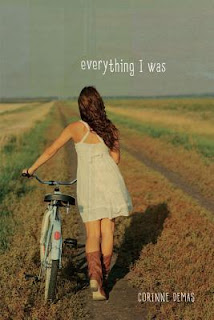 Everything I Was
By: Corinne Demas
Release Date: April 1, 2011
Author Website


"My walls were stripped, and all that was left in the room was a pile of boxes and my mattress propped against the wall."
So begins Irene's journey from an Upper West Side penthouse to—well, she's not entirely sure where. Irene's investment banker father is "downsized" when his company merges with another. When he can't find work, her family's lifestyle—and her socialite mother's spending—quickly catches up with them. Eventually, they're forced to move in with Irene's grandfather in the big family farmhouse upstate. But what begins as the most disastrous summer of her life takes a surprising turn when she meets a most remarkable family. (goodreads.com)
My Ramblings:
This was a really good read. It was fairly short (I plowed through it in a few hours) and written in a way that made it really flow off the page. Like many YA books, this is a coming of age story mixed with a little bit of fish-out of water drama. What I really liked was that it dealt with real issues. At its heart is Irene a young girl whose family lost everything when her father lost his job. With nowhere else to turn they head to her grandfather’s farm upstate.
I kind of love this family. Especially Grandpa- he wants what's best for his son and especially what's best for Irene. He's willing to give them a place in his home despite the fact that he's not so enamored with Irene's mother. Not only is Irene adjusting to this new life, which is supposed to only last the summer, but we also see her whole family trying to get their bearings. Her father seems pretty content to be back on the farm, but her mother is still living in a world of denial, and she's pretty sure life will be right back to normal in no time, and until then she's operating in "fake it til' you make it mode". It makes for some uncomfortable, but totally realistic moments.
I also really love that Irene meets up with the neighborhood kids and finds herself fitting in better then she could have imagined. Soccer in the yard, bike rides, canoeing in the lake- it was a nice introduction for Irene into small town living. In the end Irene has to decide what she really wants and how to get it. I really enjoyed seeing her go from city girl to small town gal over the course of the book. You turn the last page knowing that everyone is going to be all right!
Posted by Kate E. at 8:08 AM