My Ramblings on Returning to Shore by Corinne Demas 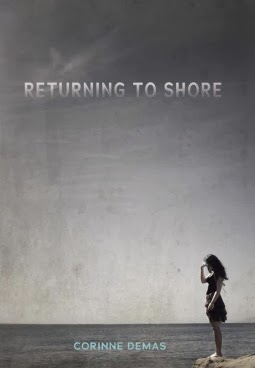 Summary:
Her mother's third marriage is only hours old when all hope for Clare's fifteenth summer fades. Before she knows it, Clare is whisked away to some ancient cottage on a tiny marsh island on Cape Cod to spend the summer with her father - a man she hasn't seen since she was three. Clare's biological father barely talks, and when he does, he obsesses about endangered turtles. The first teenager Clare meets on the Cape confirms that her father is known as the town crazy person. But there's something undeniably magical about the marsh and the islanda connection to Clares past that runs deeper than memory. Even her father's beloved turtles hold unexpected surprises. As Clare's father begins to reveal more about himself and his own struggle, Clare's summer becomes less of an exile and more of a return home. (from goodreads)

I was very excited to get a chance to read and review this book. I read Everything I Was a while back and really enjoyed it, so I jumped at the chance to get my hands on this one as well. I had mixed thoughts on this one. I really, really loved it for approximately 99% of the story. The characters are great, the main character Clare is just the perfect mix of stubborn independence and wanting to still be a kid. I hearing her thoughts on her mom and new husband, as well as her first reactions to moving to a really tiny town in Cape Cod and her father, a man she hasn't seen in years.

I really liked some of the little turns that the story took. Since this book isn't out yet I hesitate to give anything away, but suffice it to say that everything Clare believe's about her father and why he left (and stayed away) is up for reconsideration. He's not the man Clare thought he was, and she finally as a chance to both get to know him and find a little bit of herself away from her mother.

Beyond being a coming of age story for Clare, we also get some local issues sprinkled in as we learn about the terrapins who nest on the beaches. Clare's father works tirelessly to save the terrapins and their habitat, which is being encroached on by the people who are building up the land attached to the beach. While living with her Father Clare is introduced to a whole different way of life, and finds herself caring about more then just herself.

And here's the 1% of the book that I didn't like. The ending was very abrupt. The writing was great and I was invested in Clare and her father and even in the terrapins, but then the story seemed to just end, and I'll admit I was disappointed. I wanted to know more. Did Clare end up staying with her father? Did Eleanor (the terrapin Clare saw and named) survive? Did her eggs hatch and make it back to the ocean? Did Clare find the inner strength to stand up to some of the rude kids in town? In essence, what happened next?? I found myself scrolling back and forth to make sure that I really was at the end of the book and that I didn't miss anything. I just wasn't ready to be done with this story yet. Which, on one hand isn't a horrible problem, you want readers to be attached and to want more. However, on the other hand, I don't like closing a book feeling disappointed.

Overall this book was great. I loved the story and the characters, but at the end of the day I wanted more resolution to the story lines. I'm kind of hoping that there is more to come about Clare and her father and their work with the terrapins! This was a lovely story about family and finding yourself, and I think many people will be able to see themselves in the pages of the book. So while I'm hoping for more, I am able to set this book down satisfied that Clare is okay and that she has many great adventures in front of her!
Posted by Kate E. at 10:26 PM