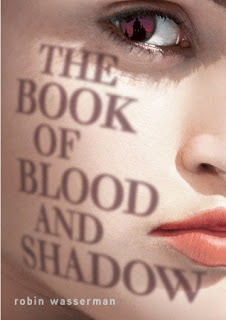 The Book of Blood and Shadow
By: Robin Wasserman
Release Date: April 10, 2012
Author Website
Summary:
It was like a nightmare, but there was no waking up. When the night began, Nora had two best friends and an embarrassingly storybook one true love. When it ended, she had nothing but blood on her hands and an echoing scream that stopped only when the tranquilizers pierced her veins and left her in the merciful dark.
But the next morning, it was all still true: Chris was dead. His girlfriend Adriane, Nora's best friend, was catatonic. And Max, Nora's sweet, smart, soft-spoken Prince Charming, was gone. He was also—according to the police, according to her parents, according to everyone—a murderer.
Desperate to prove his innocence, Nora follows the trail of blood, no matter where it leads. It ultimately brings her to the ancient streets of Prague, where she is drawn into a dark web of secret societies and shadowy conspirators, all driven by a mad desire to possess something that might not even exist. For buried in a centuries-old manuscript is the secret to ultimate knowledge and communion with the divine; it is said that he who controls the Lumen Dei controls the world. Unbeknownst to her, Nora now holds the crucial key to unlocking its secrets. Her night of blood is just one piece in a puzzle that spans continents and centuries. Solving it may be the only way she can save her own life. (goodreads.com)
My Ramblings:
This was actually the very first book I read this year. I meant to review it right away, and then it slipped away frm me and pretty soon we were getting close to release date so I decided to hold off until then. So to start HAPPY BOOK BIRTHDAY! Now, onto the review...
This book is dense. In a completely awesome way. There is so much information and so much action packed into this book, it non stop from start to finish. It's very reminiscent of The Davinci Code, not in story line, but in the way the story flows and in some of the themes. There is a lot of action and intrigue and we see our characters travel across the world to try and solve this centuries old mystery.
I thought the story was really well thought out and written. What can sometimes happen, especially when you are dealing with a lot of historical facts, you can get bogged down and lose track of who is where and what is what. I never felt that here. I had a pretty good idea of the what they were looking at and what they were looking for throughout the entire story. I was never 100% sure in terms of who the good guys were and who the bad guys were, but that's what made the story so interesting.
Since this book just came out today I'm going to refrain from commenting on the plot and characters too much because I really don't want to give anything away. I want you to go grab this book and read it yourself!
Posted by Kate E. at 8:00 AM

Labels: Robin Wasserman, The Book of Blood and Shadow