New Kids on the Block

So every once in a while I take a step outside of the land of books and write about something else. Once I wrote about Garrett Hedlund and whether the movie Country Strong was worthy of seeing in the theater (verdict? NO), another time I wrote about my horse- today though I'm going to write about a slice of my childhood that has amazingly become part of my adulthood (how often does that happen?). Of course, I'm talking about New Kids on the Block. The first concert I ever went to (that wasn't Raffi or Sharon, Lois and Bram) was New Kids on the Block. I was 9-ish and I was obsessed. I loved me some Jonathan Knight. I went on to love Backstreet Boys and NSync, but NKOTB was always #1. Then, as luck would have it, they got back together and I got to see them in a small venue in my hometown with the same person I saw them with when I was nine. 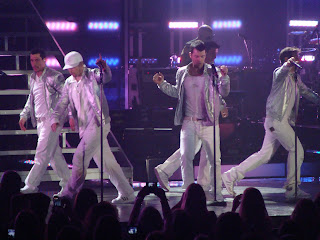 Then- as if life couldn't get any better, not only did they go back on tour, but they joined up with the Backstreet Boys to make super-group boy band NKOTBSB (I know- why had this not occurred sooner!?) So I went with the same friend again to see them. Um... Greatest. Concert. Ever. The only downside? Jonathan (who as you may recall, has always been my favorite) was injured and couldn't perform. I had to make do with my second favorite, Donnie, and the rest of the guys... 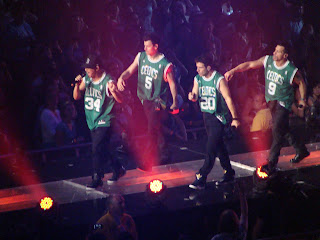 Now, I know- we are not talking about musical brilliance here (as several people have pointed out)- but dear god, do these boys know how to entertain a crowd. In fact the concert was so good that the day after we got home we bought tickets for a second concert at the end of the summer. There is something awesome about getting to go back and be a kid again. 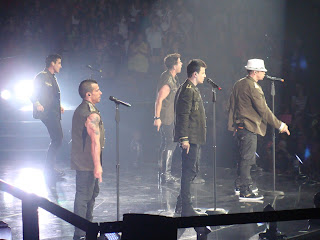 They genuinely are having a great time. They make sure the crowd is having a good time. They trot out all the old dance moves and do them like it's the first time. They make sure we know they appreciate us for hanging with them for 20 years. In fact, in the first concert Donnie made sure to take a moment to tell us. He said (paraphrasing here) "I hope you all know that we know what it means that you are here with us tonight. Don't ever forget what you mean to us" and it seemed like he really meant it. I hope they know how much they mean to us fans too! 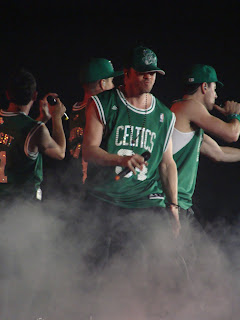 Our second concert was better then the first (if that is possible). We sat right off stage right, 9th row, but only the row directly in front of us had people in it (and those people might have been related to the Knight's)- not only were we this close to the stage, but we could see back stage, which was awesome. Especially when the back stage crew had their own impromtu performance to "Please Don't Go Girl" complete with flashlight spot lights and a very dramatic singer. Sorry Joey, I couldn't take my eyes off the guys backstage! Unfortunately I couldn't get a picture of it (too dark). However, our closeness to the stage did mean that I could use sport-shot on my camera and get some really, really good pictures! 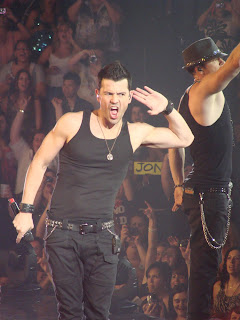 The rest of the show was pretty spectacular. I'd go again tomorrow if they had another show in the area, it was that good. The guys were at the top of their game, they had a great time and so did I! I'm so glad that they got back together, joined up with BSB and went on tour. I really hope they come back again next year :)
Now for a few more pictures of this last concert! Enjoy!! 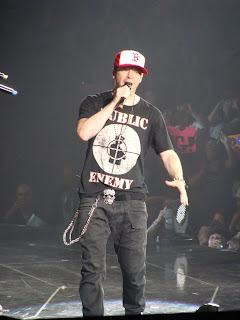 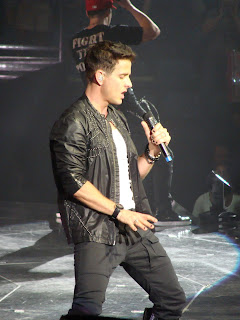 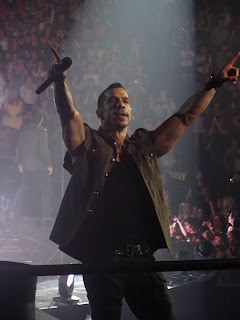 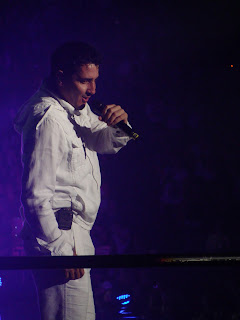 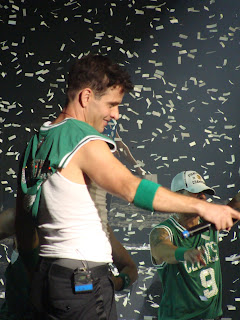 *for more NKOTB & NKOTBSB pictures from this tour and from a few years ago, click on over to my flickr album: ElstadRanch- New Kids on the Block
Posted by Kate E. at 10:05 PM