My Ramblings on Why this Week is Awesome!

Some very cool stuff happened in the last few days... some book related, some not, but all worth mentioning. Don't fret (I know you aren't)- a book review is coming soon! I just finished Simone Elkeles' Chain Reaction, I need a hot (and I mean hot) second to process it all and then I'll be back to share my ramblings with all you. First though... why this week rocks.
*******************************
1. I won TWO contests. One bookish, one not. One that I knew I was getting (based on when I entered), one I had no clue I was getting.
Contest one was from Elkeles herself as part of her Chain Reaction Release date festivities. All I had to do was post a picture of me with Chain Reaction. If I was one of the first 50 I would win an autographed picture of the Fuentes brothers. First I was bummed. I didn't have Chain Reaction. Then I got an email from BN- turns out I pre-ordered the book months ago and it was waiting patiently on the Nook to be read! So I snapped a shot, posted to Facebok and was in line for a picture. 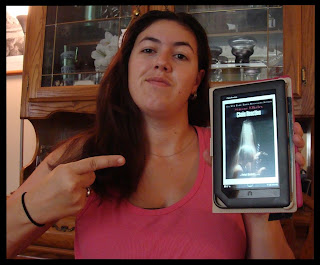 (not sure why I look so smug here- I just do)
This means I get a picture of some sort signed by these three young men. Well worth sharing a crappy picture of myself with the internet, right? 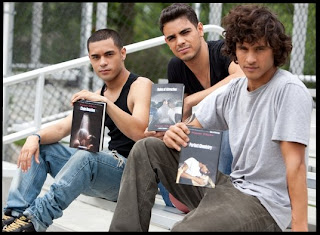 By the way- have you read these books? If not, you should. Like now. And while you are at it, go get all her other books, and also, if you have the chance to see her in person, get on that too. I kid you not she is the funniest person I have ever had the pleasure of meeting. I won't even blame you if you stop reading this post to go do it. (although fair warning- there's Joey Lawrence in the next section. So you know, you'd be missing out on that.) 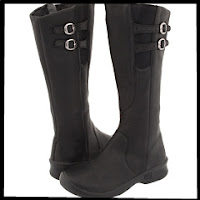 Contest 2 has zilch to do with books- but it does have to do with shoes, and who doesn't like that. Right? Anywho- my favorite brand of shoe is Keen. These are not sexy, man killer shoes. These are I'm going to wear them everyday while I chase a toddler shoes. Also, climb some mountains and play in the mud and water shoes. There are 3 people in my house- there are 8 pairs of Keens. My love for this brand clearly overpowers the purse-strings every time they send me an email. Yesterday I captioned a picture on twitter and low and behold I won a pair of Keens. I've been coveting these boots for MONTHS. I ordered them this morning...FOR FREE. So yeah-- awesome :)

*******************************
2. And now for what is clearly the most awesome portion of this week (although free stuff is hard to top). Yesterday I got an email from twitter. It was a generic "so-and-so is now following you" blah-blah-blah. I generally check the persons profile- see if it's someone worth following back and the delete the email. This is the notice I got yesterday....

Joey Lawrence as in "WHOA" was following me on twitter. I don't know why. I don't follow him (I'm not overly sure I even like him...he'll probably unfollow me now). Still- as a child who grew up on Blossom and TeenBeat, this is inexplicably cool. I have a few theories as to where the guy even found me. One is that he has a love for reading and found me that way...this is obviously a long shot. Maybe his twitter account was hacked and for reasons only known to the person who did, I was chosen as part of some nefarious plan and thus was followed- this is also silly. My last theory, which I almost love more then the fact that he's following me is that he twitter stalks the NKOTB twitter accounts and snags up unsuspecting fans to follow that way. I tweeted several NKOTB related tweets in the last few week and suddenly former teen heart-throb Joey Lawrence is all over it. Coincidence? I think not. Although, if this theory is true, um... there's no other way to say it, but dude...lame. Maybe if Joey Lawrence is reading this post (as I will be tweeting a link) he can give me the real deal- but until then I will simply say he is following me because I am awesome (obviously).
Furthermore- I prefer to believe that it's Blossom-era Joey Lawrence following me and not Melissa and Joey-era Joey. For obvious reasons and not just the hair. I mean come-on. Look at this vest: 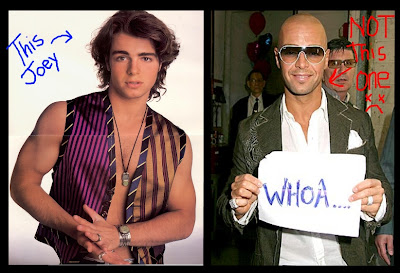 
So that is how this week has gone so far, and it's only Wednesday. Clearly I should be out buying a lotto ticket or something. *Sigh* Now I'm off to work on real book blogging stuff... you know, reviews and what not. Stay tuned for Chain Reaction, George RR Martin's Clash of Kings and Lisa McMann's The Unwanteds.
Hoping everyone else's week is loaded with awesome too!
Posted by Kate E. at 2:57 PM