My Ramblings on The False Princess by Eilis O'Neal 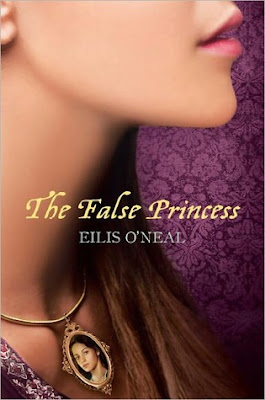 Princess and heir to the throne of Thorvaldor, Nalia's led a privileged life at court. But everything changes when it's revealed, just after her sixteenth birthday, that she is a false princess, a stand-in for the real Nalia, who has been hidden away for her protection. Cast out with little more than the clothes on her back, the girl now called Sinda must leave behind the city of Vivaskari, her best friend, Keirnan, and the only life she's ever known.
Sinda is sent to live with her only surviving relative, an aunt who is a dyer in a distant village. She is a cold, scornful woman with little patience for her newfound niece, and Sinda proves inept at even the simplest tasks. But when Sinda discovers that magic runs through her veins - long-suppressed, dangerous magic that she must learn to control - she realizes that she can never learn to be a simple village girl.
Returning to Vivaskari for answers, Sinda finds her purpose as a wizard scribe, rediscovers the boy who saw her all along, and uncovers a secret that could change the course of Thorvaldor's history, forever.
A dazzling first novel, The False Princess is an engrossing fantasy full of mystery, action, and romance.

So I'll be honest and say that when this book showed up at my library with my name on it I could not for the life of me remember why I had reserved it. Was it on a list somewhere? Part of a Challenge? Was it the beautiful cover that had caught my eye? In the end I realized it was a combination of all three- it was on the list of books eligiable for the Debut Author Challenge hosted by The Story Siren and I picked it off the list because of the kick-ass cover. Phew. With that mystery solved I was ready to read.

First off, what a great story this is! One of my favorite things is when a story sneaks up on me. I'll admit to not really have any expectations of this book. I hadn't heard anything about it, so I went into it without any preconcieved notions. I was so pleasantly surprised on this one. The main charecter is a formidable one- raised a princess we meet her on the day that she discovers that she is, in fact, a false princess, brought in to replace the rightful princess in order to break a prophecy. O'Neal really weaves a twisted, complicated, but ultimately rewarding tale.

O'Neal packs alot into this relatively short book. There's friendship and love, revenge and murder, ancient plots and prophecies and ultimately a choice that must be made by Sinda. What I really liked is that O'Neal allowes her charecter the opportunity to go through all the emotions one would expect- she's angry, shocked, upset, depressed and eventually she comes to terms with it and even finds her new place in this world. Sinda has a kind of strength that sometimes comes off as stubborn or immature, but always is believable and genuine, and that is refreshing. The secondary characters all have a part to play, especially best friend Kiernan who also has to figure out this new relationship and what it means for him. There are very few characters that I felt were un-needed, and even they didn't bother me so much.

So, in short, I REALLY glad I chose this book of that list- it was just the right book to read at the start of my summer. (Summer reads for me and light and easy, but certainly NOT fluff) It's a great story about growing up and figuring out who you really are, and if it's the title or your actions that really define you.

I have to say I'm really hoping for a sequel on this one to see how everyone is adjusting to their new roles, but if it's a stand alone, i'm okay with that too. It tied up all the loose ends and I felt like everyone was where they were supposed to be!

Want to get more info or buy The False Princess?