My Ramblings on The Scorpio Races by Maggie Stiefvater 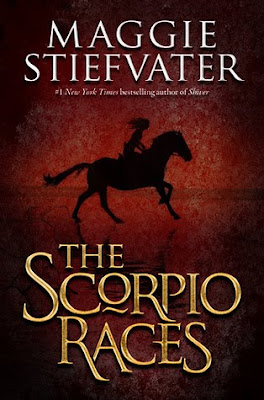 Summary:
It is the first day of November and so, today, someone will die.
Even under the brightest sun, the fridgid autumn sea is all the colors of the night: dark blue and black and brown. I watch the ever changing patterns in the sand as it's pummeled by countless hooves.
They run the horses on the beach, a pale road between the black water and the chalk cliffs. It is never safe, but it's never so dangerous as today, race day.

My Ramblings:
I finished this book a little over a week ago and have been putting off writing the review. A few reasons slowed me down really. First, school, currently the bane of my existance started back up for the summer and second, what could I say about this book. "Wow" didn't seem sufficient despite the fact that it's the first word that keeps popping into my head. That and "I love this book". To start though, I'm a huge Stiefvater fan, I'd read just about anything she writes and I'd bet money on liking it, but this book is by far my favorite book of hers. For me, it blows the other ones stright out of the water. Let me see if I can explain why.
To be fair I might as well mention that I love horses. I grew up with them, I still have them, my two year kiddo already rides. They are a part of my life, a part of who I am, so the fact that Stiefvater so perfectly captures what that is like really goes a long way for me. In this story there are two types of horses, the inland ponies and the capaill uisce. Water horses who feed on blood and are known to kill animals and humans alike. On the island of Thisby, once a year, they capture and race the capaill uisce, and every year people die. There suspense that surrounds the race really pulls you in- who will survive, who will walk away stronger and who will be crushed under the pounding hooves?
The story focuses on two characters. First is Sean Kendrick, who works at the stables on the island and trains horses, regular ones for the bulk of the year and then the capaill uisce as the race approaches. He lost his father, a trainer as well, 9 year prior in the races and has been filling his shoes ever since. He and his horse, Corr, are something like legend on Thisby- their relationship is one built on respect (not trust) and a bit of magic. The are the one to beat in the races. Then there is Kate "Puck" Connelly who is a horseman in her own right. In order to save her family home after the loss of her parents to the capaill uisce, she is willing to pit herself and her inland horse Dove up against the water horses in the race.
So that is the center of the story- both Puck and Sean's futures hinge on how well they do in the race. Will Sean be set free from just being a trainer in some other man's barn and will Puck be able to save her farm and remain on the island she loves. There is so much more in this book though. the family dynamics between Puck and her brothers, Gabe and Finn, are both lighthearted and heartbreaking. Seeing Sean struggle to become his own man. Watching both Sean and Puck fight against those who would push them down and hold them back. Witnessing Sean and Puck finding eachother at the exact moment they need someone to lean on who understands. Wondering how a relationship can survive when only one can win even when winning might mean losing it all.
Like I said- it has it all, and for those of us who ride horses, there was one part where I said to myself "God she got it right"- so I'll share it here, it's from the first time Sean lets Puck ride Corr:
We are flying.
Corr's skin is hot against my legs- clingy, somehow, like when the current pushes your toes deeper into the sand. I feel his pulse in my pulse, his energy in mine, and I know this is the mysterious, terrifying power of the capaill uisce...
and then a paragraph later:
The magic becomes a dull hum through me. My body warns me of the danger of this capaill uisce beneath me, but at the same time it screams that it's alive....
Now I've never ridden a killer water horse who would just as soon drag me into the ocean for dinner, but there is something so right about this description as it applies to riding horses (the regular non-killer kind). There is that moment when you forget about the dangers that come with it, where you and the horse begin to merge into eachother and you just enjoy the ride. Troubles slip away and it feels like freedom. There are other quotes (to numerous to recount in a blog post) that speak to a love for the land, a connection to a place and sense of knowing where you belong in the world that I loved. There were so many moments where Stiefvater really hit the nail on the head for me. That's what Stiefvater captured in this book. That knowing where you belong. That moment when you lay it on the line, you throw caution to the wind, and enjoy the ride no matter the cost or where it might take you.
As far as I know this isn't a series of any kind, and while I'm REALLY looking forward to Forever (The Wolves of Mercy Falls series)- I'm not-so-secretly hoping that we'll see more of Sean and Puck and they capaill uisce on the Isle of Thisby.


Want to pre-order The Scorpio Races? (you know you do...)