So first off- I've been MIA for about a week now. For very good reason- massive Literature Review was due for class and it became a world class time suck. Not only was this blog abandoned, but so were things like laundry and dish washing. All in all it was a messy week at my house. I did however manage to finish one book- and the TBR pile is about 8 high, so unless more school work pops up and surprises me, I should be able to get a few more reviews in this week (hopefully.

Secondly- this review contains some minor spoilers, so tread carefully if you haven't read it yet. 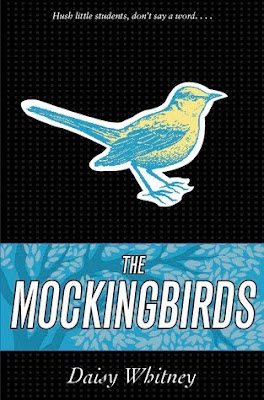 Summary:
Some schools have honor codes.
Others have handbooks.
Themis Academy has the Mockingbirds.

Themis Academy is a quiet boarding school with an exceptional student body that the administration trusts to always behave the honorable way--the Themis Way. So when Alex is date raped during her junior year, she has two options: stay silent and hope someone helps her, or enlist the Mockingbirds--a secret society of students dedicated to righting the wrongs of their fellow peers.

In this honest, page-turning account of a teen girl's struggle to stand up for herself, debut author Daisy Whitney reminds readers that if you love something or someone--especially yourself--you fight for it.

Review:
So. I didn't really like this book. There were parts that I really enjoyed, but there were also alot that really rubbed me the wrong way. That being said, I do think it's probably a really good book, based on the fabulous reviews that are popping up everywhere, it jsut wasn't a great book for me. So lets start with what I didn't like and finish on a positive note.

The big thing that rubbed me the wrong way was that I felt like everyone was pushing Alex. She made some big mistakes by getting drunk at the club, and then she paid the ultimate price with Carter. It's a horrible thing, what she went through. But almost immediately it was overshadowed for me by her friends. Alex barely makes it home before her roommate TS is pushing for information, then she's off to see her sister Casey who tells her it is rape. Then she's being pushed towards the Mockingbirds and then towards pressing charges against Carter. All within a matter of days. I felt like Alex was never given the chance to process what happened for herself. She never had that moment to sit and reflect on what went down. I felt like she never got the chance to make the choice for herself. And I really wanted that for her. I wanted her to reflect on not only what happened, but what led up to it, what it all meant to her. Instead I felt like she was constantly being told what happened and what to feel and what to do by those around her. It really bugged me. To the point where I almost put the book down.

The next thing was the whole idea of vigilante justice that the Mockingbirds dole out. Yes they have check and balances and they try to be fair, but there were things that were missing for me. Carter paid for his actions, but what about everyone else? Sandeep was serving up alcohol to everyone around him, Alex chose to get tanked, her friends chose to let it happen even when they saw how intoxicated she was. It seemed like no one was taking responsibility for their actions. From there it bothered me that the Mockingbirds pick and choose whose cases to take, whose crimes to punish. Who do they turn down? Whose crimes are forgivable? Sandeep's for sure are as he was not even scolded for his actions. When it becomes that subjective is it even justice anymore?

So that's what bugged me- now for the things I really liked. Loved the friendships and the loyalty that was going on. Although I felt they were pushy with Alex, you cna't deny that they cared. They stuck with her, that had her back and that they wanted what was best for her. That's unual in high school. Friendships are often fair weather and fleeting, so to see them band together to help Alex get through it was admirable and really great to see.

Despite my dislike for some of the way it all worked, I also really liked the idea of the Mockingbirds. In the students taking it into their own hands and trying to do what was best for all the students. I loved the connections to To Kill a Mockingbird and how they looked towards that book for inspiration and direction. I really enjoyed seeing how much thought was put into how it all would work, how they could make it as fair as possible and how they could make it work.

In the long run this book was okay- there were some things that were done really, really well, but there were also some things that I just couldn't get past. This is a series, and although I think that this book stands up on it's own, I am interested to see where Alex's story goes from here.