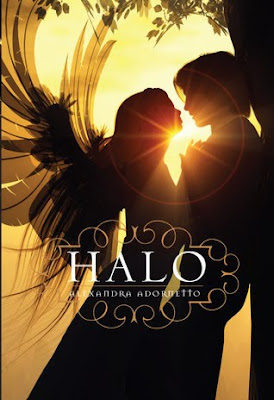 Three angels- Gabriel, the warrior; Ivy, the healer; and Bethany, the youngest and most human- are sent by Heaven to bring good to a world falling under the influence of darkness. They must work hard to conceal their luminous glow, superhuman powers, and, most dangerous of all, their wings, all the while avoiding all human attachments.

Then Bethany meets Xavier Woods, and neither of them is able to resist the attraction between them. Gabriel and Ivy do everything in their power to intervene, but the bond between Xavier and Bethany seems too strong.

The angel’s mission is urgent, and dark forces are threatening. Will love ruin Bethany or save her?

This was an interesting book for me. The big reason is the one that you are not supposed to talk about- religion. Isn't that what they always say- don't talk about religion and politics? With this book though, you can't really not talk about religion, especially seeing as the story revolves around three angels, Ivy, Bethany and Gabriel, who have been sent on a mission by God to help combat the forces of evil. So with that in mind I was hesitant. I am not a religious person, and I hate being preached at. That's not to say I am anti-religion, I think there is a form of faith out there for everyone, organized or otherwise, but the thing that gets me really ticked is when I feel as though someone doesn't accept the fact that our faith doesn't have to all be same. So it was with a bit of trepidation that I opened this book.

For the most part I really didn't have to be worried. For sure, religion plays a huge part of this story. Still, I rarely felt like the author was trying to force a belief system on the reader through the story. Instead I found the book to havea good message of faith in general, no matter what form it takes. It had a classic story of good vs. evil and how those two forces can play out in a small town. Ivy, Gabriel and Bethany are trying to lead through example. They never talk religion, but instead volunteer at different organizations, talk to people about how to make a differance in their community and how to be good people. Religion aside- that's a good message to have out there.

I also enjoyed Bethany struggle with both her mission and her faith. Ivy and Gabriel have come to earth on missions before and are used to interacting with humans in an emotionally detached way. Angels are not supposed to form bonds and connections and above all are not supposed to reveal who and what they really are. Bethany on the other hand is chosen for the mission because of her ability to connect and feel for humans. Her mission is the same as Gabriel and Ivy's, but she finds herself struggling with how to deal with all the new feelings she is confronted with and how that rectifies with who she is and what her mission is. She may be an angel, but she is also a girl who is trying to figure out where she fits in and what her purpose is. Throw in a boy who needs a little saving and you pretty much have a recipe for disaster.

Xavier is a pretty fabulous boy as far as boys in books go. He's reeling from the death of a girlfriend and trying to basically get though high school without getting hurt again. Of course he and Bethany fall for eachother. With them you get a real star-crossed lovers feel. Their relationship is against all the rules, but for whatever reason they are allowed to continue to see eachother. Bethany even reveals her true nature to him and he accepts it and even vows to find a way that they can stay together, despite the fact tht at any minute Bethany may be recalled to heaven.

There were a few things that I didn't like, and they may have less to do with this book specifically, and more to do with the books I have been reading lately in general. This book is the first in a series. Which means there is no resolution to be had at the end of the book. We spend the book witing to see if Xavier and Bethany will find a way to be together. They fight the forces of evil together and emerge closer then ever, but there is no final decision as the book draws to an end. What will the decision be? Will Bethany be recalled to heaven (or worse) for breaking several rules? It was all leading up to finding the answers to these question and it felt like a let down when there was no answer to be had. Im finding this is more and more common in YA books- they are all part of a bigger series, which means we must wait to see what happens. With so many books out there to read I want to get to the ending without having to wait months or even years to see what happens. So my complaint for this book was really one that I have for alot of books lately and that is just that I wanted it to all resolve by the end of the book!

The series fatigue aside this was a good book. As noted, it has heavy religious undertones, but I thought the author wove them well into the story in a way that made complete sense. And lets be honest- the cover of this book is breath taking. Its what got my attention in the first place and the book lives up to the cover. It's a beautiful love story that's just waiting for it's happy ending.