My Ramblings on The Hobbit by J.R.R. Tolkien 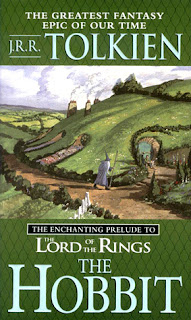 The Hobbit
By: J.R.R. Tolkien


Summary: Bilbo Baggins was a hobbit who wanted to be left alone in quiet comfort. But the wizard Gandalf came along with a band of homeless dwarves. Soon Bilbo was drawn into their quest, facing evil orcs, savage wolves, giant spiders, and worse unknown dangers. Finally, it was Bilbo-alone and unaided-who had to confront the great dragon Smaug, the terror of an entire countryside . . .
My Ramblings:

This is the first book on my summer of Fantasy and Magic, in which I will re-read some of my old favorites and start some new discoveries; namely Lord of the Rings, Harry Potter, Song of Ice & Fire and lastly Dune (which was just recently recommended to be).  I'm giving a go by reading the books in a rotating order. Game of Thrones I read a few months ago, so The Hobbit is my first from the LOTR series, and I've just picked up Harry Potter and the Sorcerer's Stone, once I've finished the first book in each series, it will be back to the start for the second book, and so on. Enough about that though. How did I feel about The Hobbit?
Well, I haven't read the book since middle school, so it was a bit like rediscovering a world all over again, or visiting an old friend that you haven't seen in a really long time. Some of it was familiar and some parts I had completely forgotten. It was also hard to read the book without picturing the setting and charecters from the LOTR movies- which, as there were so well done, wasn't really a problem.
Some of the the things that I shook my head at were Gollum and his riddles. I love the moments where Tolkien says that the reader has probably figured the riddle out by now, I hadn't, and even when given the answer I wasn't sure I really got it (I'm not sure I should admit to that). I was also surprised at how deceptively simple the writing is. It wasn't hard to wade through and there wasn't a huge amount of extra descriptions and dialog- it was straight and to the point, but still worked for me. I'm not sure what I was expecting, but the writing seemed much more bare then I remembered, if that even makes sense.
The long and the short of it is that it was still an amazing book to read, even after all this time, and after seeing the movies bring the world to life. Bilbo was still brave and courageous and a remarkable complainer. The dwarves were still wimpy despite their strength and focused on the gold and revenge more the the plan. Gandalf was still the wise old man, pulling strings and setting everything in motion- he struck me as quite a bit more of a puppet master then I remembered, not in a bad way, but he had his hand in every misadventure and rescue throughout. I love how he believes in Bilbo and is genuinely proub of the little hobbit by the end of it all. Lastly, I can not wait to see this story come to life on the big screen and fall in love with it one more time!
Posted by Kate E. at 9:22 AM

Labels: JRR Tolkien, Summer of Fantasy and Magic, The Hobbit