My Ramblings on Dune by Frank Herbert 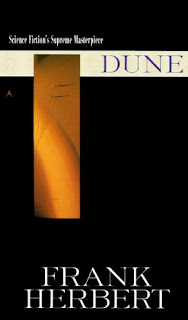 
Here is the novel that will be forever considered a triumph of the imagination. Set on the desert planet Arrakis, Dune is the story of the boy Paul Atreides, who would become the mysterious man known as Maud’dib. He would avenge the traitorous plot against his noble family—and would bring to fruition humankind’s most ancient and unattainable dream.
A stunning blend of adventure and mysticism, environmentalism and politics, Dune won the first Nebula Award, shared the Hugo Award, and formed the basis of what is undoubtedly the grandest epic in science fiction. Frank Herbert’s death in 1986 was a tragic loss, yet the astounding legacy of his visionary fiction will live forever.
My Ramblings:
First off, let me just say, this is one hell of a book. Amazing, really. It's hard to know where to start with a book like this because it covers such a huge amount of information and a large chunk of time. I guess I'll get the negatives out of the way early. The biggest downside to this book really is just the sheer volume of information being put in front of you. It really is a whole new world. There are strange names, oddly familiar (but totally foreign) customs and beliefs and a cast of characters that can sometimes be hard to keep straight. Speaking of names- one thing that isn't a huge deal, but honestly got me thinking several times were the names. Specifically the names of the two main characters we follow. In this book we get names like Astreides, Harkonnen, Thufir, Gurney, Stilgar and Chani- all are slightly exotic sounding and speak to the setting of the story. Our two main characters- the concubine and son of the Duke Leto Astreides- whose adventures we follow bear the wildly unique names of (wait for it) Paul and Jessica. Now, again, is this a big deal? No. Does it take away from the story? Not really. Did I spend way more time then necessary trying to figure out why their names were so generic and bland? Absolutely. So for me, this was a minor distraction.
Beyond the massive quantity of information to take in and make sense of this book was pretty darn amazing. There were passages that, though written in 1965 originally, still hold strong today. As an aside, I picked this book up on the say so of my Uncle, who said "everything you need to know about life, you can learn in Dune". This may sound like tall order, but I think he's right (especially if you look beyond the story held in the pages). There are snippets of religious readings from the O.C. Bible and there are reflections and quotes on the life of Muad'dib. Little life lessons crop up, like"Parting with friends is a sadness. A place is only a place." and "The mystery of life isn't a problem to solve, but a reality to experience.".  A phrase that is often repeated is "I must not fear. Fear is the mind-killer. Fear is the little-death that brings total obliteration. I will face my fear. I will permit it to pass over me and through me. And when it has gone past I will turn the inner eye to see its path. Where the fear has gone there will be nothing. Only I will remain." These (and others) all speak to the place where the characters are living and surviving as well as give the reader food for thought on their own lives.
Paul's story really is a classic hero story. Unfortunate circumstances fall upon him. He loses a role model in a tragic circumstance. He is exiled, he faces hardships and tests of faith. Eventually he overcomes these obstacles and eventually good defeats evil. Or does it? The twist here is that Paul is also fighting his own fate. A fate he has the ability to see laid out before him in potential possible paths. The thing he tries to prevent may be inevitable, no matter which path he chooses. Or, the choice to avoid one tragedy might actually cause something even more heartbreaking to befall him.
I don't really want to get into a lot of the plot of this massive novel. I think if I started I really wouldn't be able to stop. Suffice it to say that this book truly is epic. If you like SciFi and don't mind putting some time and effort into reading then this one really needs to be added to the to-be-read pile.
***********************************
Posted by Kate E. at 10:06 PM