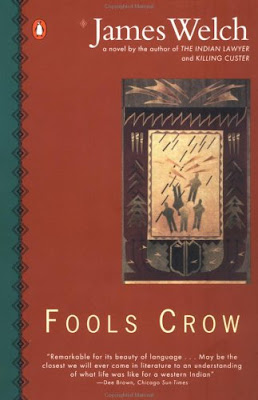 Summary:
The year is 1870, and Fool's Crow, so called after he killed the chief of the Crows during a raid, has a vision at the annual Sun Dance ceremony. The young warrior sees the end of the Indian way of life and the choice that must be made: resistance or humiliating accommodation. "A major contibution to Native American literature."--Wallace Stegner.

Review:
I read alot of YA. Alot. Everyonce in awhile I like to go pick up a book that touches on the subjects I studied while in school- mainly the history of the west. The Indian Wars, the vanishing frontier, the manifest destiny and the wiping out of a whole race of peoples way of life. These things have always interested me and occassionaly I need to step outside the lives of teens and reconnect with that part of myself. So it was with that in mind that I finally picked up Fools Crow- a book which has been on my shelf for probably a year or so.

This was a fabulous book about the end of an era- the one in which the tribes ruled the plains. In this case we follow the rise of Fools Crow as he grows from awkward teen to warrior and leader of the Pikuni (of the Blackfeet). One thing I really enjoyed was seeing the thought process of the tribe as they try to imagine and prepare for the possibilities. They know the white men are coming, they've met with them and signed treaties, they warred with them and killed settlers, but they do not yet know how it will all end. Some want to continue to fight, some think it's best to try to work with the army and settlers. Some, like Fools Crow seem to realize that either way they will lose and that there will be nothing to do about it except continue to try to survive.

The other thing I really enjoyed was that Fools Crow was in training to be the medicine man of sorts to the Pikuni and therefore we get a great look at the way healing and ceremony works for this tribe. I especially loved the dreams that Fools Crow has and how they inform his waking life, as well as his relationship to the real-bear, his totem and protector.

This is an older book- written in 1987, but it holds up. The story is intriguing and pulls you in as you watch a people try to save themselves from what we know is the end of the lives they've always led.