Review & Contest: She Smells the Dead by E.J. Stevens 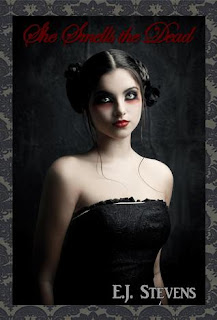 Summary: It's the beginning of senior year and Yuki's psychic awareness of ghostly spirits is threatening to ruin her life. Her ability to sense spirits of the dead isn't glamorous like the ghost hunting on television.

Review: First off, I want to say that I think the cover of this book is beautiful. Everyone says "you shouldn't judge a book by it's cover", but I think most of us do, we can't help it. I really love this cover, it caught my eye months ago and had me interested, so when Stevens sent out a request for bloggers to read and review her book (and hold a contest), I was all over it. Just based on the cover alone. So well done on that front.

As for the book, there were parts that I loved and few little things that irked me. Let's get the "meh" parts out of the way quickly and move on to the love, shall we? Biggest thing I didn't like was over and done with in the first few chapters, so in the long run, not a huge deal, but it stuck with me. In the book, Yuki repeatedly reminds us she smells the dead. Over and over again- I found myself rolling my eyes and thinking "I get it, you smell the dead, you don't need to remind me, I won't forget". To me, it was too much. It's not a hard concept to understand, so I dind't feel like I needed to be reminded about Yuki's ability. As the book moved forward, the references stopped and I thought the book was better for it. Other minor "meh"? The ending totally drops off. I get a cliff hanger, but geez, this really leaves you hanging! Thank goodness Stevens has a sequel coming, because I really wanted to know what will happen on Halloween! So there you go, my big "meh", now I can move on.

Things I loved- Yuki. Admittedly I love the whole idea of smelling the dead. (Not that I want that ability, but it's something new and different and therefore = love) I like that she uses the scent as a sort of "getting warner, getting warmer, colder!" detection device, and even uses it as her own personal Ouija board. She has this oversensitive sniffer, and it kind of sucks, but she does with it what she can to help the dead find peace. I also loved Yuki's style. She is most definitly true to herself and that is refreshing. I was also pretty happy with the fact that she has told her best friends about her ability- too often we see the main charecter hide their supernatural gifts, and become isolated, but here she hads friends who know whats going on and stand by her and even help her. Both Emma and Calvin are great charecters and great friends.

Speaking of Calvin- totally down with his supernatural gift as well. I'm not going to give it away, but I like that it was something familiar, but twisted in a new way. His relationship with Yuki and what he has to be for her was a good way of tying them together. It made their friendship so much more without jumping into the generic and sterotypical love triangle, which is pretty played out.

Like I said, the book ends rather abruptly, but that doesn't neccessarily take away from the story itself. This book lays good goundwork for the remainder of the Spirit Guides series, which I'm looking forward to reading when they come out.

simply fill out the form below to enter:
Posted by Kate E. at 9:13 AM