WORD for Teens has a pretty cool game and giveaway going on over at their site that I just couldn't pass up. It's called CAST YOUR VILLIAN and here's what you do (it's really, really easty) You pick a villain and decide who you would cast and why.

So many villians popped into my head- President Snow from the Hunger Games, The Archvillian from Barry Lyga's Archvillian, The Iron King from the Iron Fey series. All would be fun to cast, but ultimately I went with.... 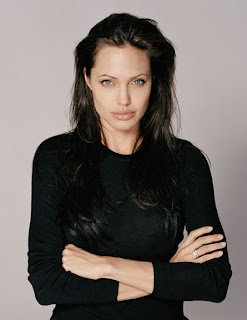 Seraphine from Beautiful Creatures and Beautiful Darkness (Kami Garcia and Margeret Stohl)
Cast: Angelina Jolie
Why: I had a few actresses in mind. Someone beautiful, but who could really pull off the evil lurking beneath. In my mind she was thin and frail, but with power emenating from her. Jolie in undeniably a beautiful lady, but I've always found there to be something just a tad bit off about her, as if at any moment you could find yourself on her bad side. This is how I imagine Seraphine as well!
Posted by Kate E. at 11:00 AM