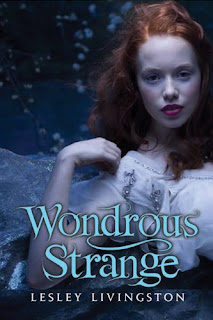 Wonderous Strange
By: Lesley Livingston
www.lesleylivingston.com
Kelley Winslow is living her dream. Seventeen years old, she has moved to New York City and started work with a theatre company. Sure, she's an understudy for the Avalon Players, a third-tier repertory company so far off-Broadway it might as well be in Hoboken, but things are looking up—the lead has broken her ankle and Kelley's about to step into the role of Titania the Fairy Queen in Shakespeare's A Midsummer Night's Dream. Faeries are far more real than Kelley thinks, though, and a chance encounter in Central Park with a handsome young man will plunge her into an adventure she could never have imagined.

For Sonny Flannery, one of the Janus Guards charged by Auberon, the King of Winter, with watching over the gate into the lands of Faerie that lies within Central Park, the pretty young actress presents an enigma. Strong and willful, she sparks against his senses like a firecracker and he can't get her out of his mind. As Hallowe'en approaches and the Samhain Gate opens, Sonny and Kelley find themselves drawn to each other—and into a terrible plot that could spell disaster for both New York and Faerie alike.
***************************************
*There are a few spoilers in here, so there is your fair warning :) *
I just finished this book- it's 3:40 am, so that should at least speak to the fact that this book is slightly addicting. It took me a bit to really get into, but once I did, I didn't want to put it down. I thought that this was a great book, mostly because it packed in a little bit of everything without become overwhelming or cluttered. There was humor and action, magic and war, and of course a little romance, all working together.
Of course, I liked our leading lady- if she wasn't beleivable the whole story would falter. As usual with most YA books, Kelley is a reluctant hero, she's different, but doesn't know how or why. Over the course of the story she comes to realize who and what she is, and in the end accepts her birthright and becomes one heck of a faerie warrior.
One thing I really liked was the play within the story. Kelley was stepping into the role of Titania in Midsummer Night's Dream just as she was learning of her role as faerie princess (daughter of the real Auberon). Even though it could have come off as cheesy, I really enjoyed it because the play loosely mirrored the faerie world Kelley was discovering without becoming cliche, or overdone. I loved how the real Puck was playing Puck and how he was able to kind of explain the similarities to Kelley.
I loved Sonny as well- I thought he was well written in that he was able to relate to Kelley, want to protect Kelley, but still be this kind of uncomfortable teenage guy who totally doesn't know how to deal with Kelley at first on a very basic social level. Some of their early interactions were almost cringe-worthy as he tried to figure out who Kelley really was and how to help her. As a Janus guard he works for Auberon, but he also is drawn to keep Kelley safe, which in the end pulls him in two different directions.
I thought this book wrapped up nicely- with good resolutions for pretty much everyone, but with enough left unanswered to make you want to read the sequel Darklight. It will be interesting to see where the story goes next now that Kelley has accepter her identity as the daughter of two very powerful faeries (Mahb being her mother), and the power and danger that comes with status.
********************************
Livingston has a great website that has some book trailers and links to her blog and more. Also- this book is one of EFG's and TwilightMom's June Books, so if you like this book (and Darklight, also a June book) check back in June when we will hopefully be having a contest and chat.
Posted by Kate E. at 3:35 AM